The activity in the area is a cause for concern, as President Donald Trump is expected to meet with Kim Jong Un sometime before May, and they are very likely going to discuss North Korea’s denuclearization.

According to a report by Jane’s Intelligence Review and the Center for International Security and Cooperation at Stanford University, preliminary testing at the experimental light water reactor may have already begun.

While the reactor’s main purpose is to produce electricity for the civilian population, the reactor can also be used to produce nuclear weapons materials such as plutonium and tritium, according to the report. 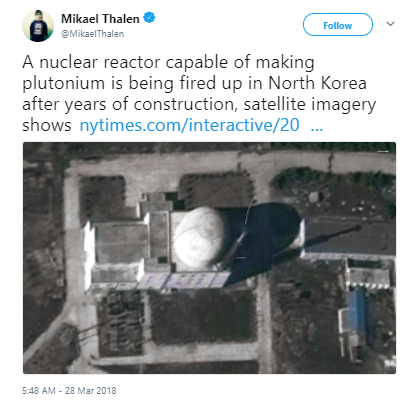 Satellite imagery showed increased activity at the site in 2017, suggesting that North Korea has been pushing to get the nuclear reactor fully operational. Images also show work being done on a river cooling system for the nuclear reactor.

The purpose of the nuclear reactor could not be confirmed because only an international inspection would be able to determine its purpose. If the reactor is used to generate electricity, it could produce enough to power a small town.

“Further monitoring of the type and cadence of activity at the site is likely to reveal clues about North Korea’s ultimate intentions,” according to the report.

In another report by 38 North, there was increased activity at a reactor at the Yongbyon Nuclear Research Center. Steam was seen coming out of the building, and ice was melting on the frozen river at the site.

“This shows signs that 5,000 kilowatts of nuclear reactors are ongoing,” the report said. “If the reactor is restarted as evidenced, this means that North Korea probably resumed plutonium production for nuclear development. This also means that North Korea can extend the pipes for cooling water discharge to the river (not near the river) in order to further conceal the operating condition of the nuclear reactor better and further make future monitoring activities more difficult.”

ISIS-K commander killed during Afghan and US SOF raid