A Navy spouse and her family were recently awarded $24.7 million following a lawsuit against the military for suffering major kidney damage in 2013 after giving birth to her daughter at Tripler Army Medical Center in Honolulu, Hawaii.

Marites Campano and her husband Raphael were awarded the $24.7 million for health damages that eventually led to the loss of both her kidneys. 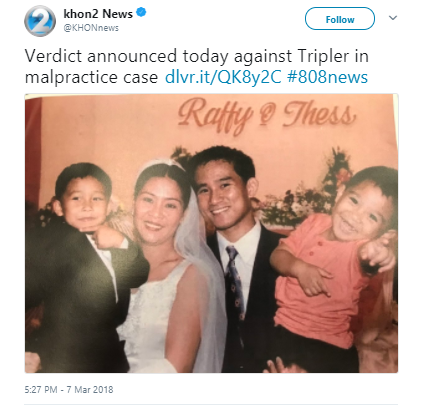 After giving birth to her daughter at 1:10 a.m. on July 23, 2013, Marites Campano suffered from sepsis caused by a bacterial infection.

“Two hours later, at 3 a.m., she spiked a very large fever and it was obvious at that time — and that was the start of the continuing breech of the standard of care — the malpractice — that she had an infection that should have been treated with IV antibiotics,” attorney Rick Fried told the Star Advertiser. “There’s no risk, and it was almost presumptively a serious infection that needed treatment.”

Physicians at Tripler Army Medical Center failed to treat the infection with antibiotics. She suffered from multi-organ failure and was put on a ventilator as a result.

Marites Campano eventually lost both her kidneys and had to undergo a kidney transplant. She suffered kidney disease requiring dialysis and will be required to take immunosuppressant medication for the rest of her life.

Marites Campano wasn’t discharged from the hospital until late August, but was readmitted in September following more complications.

The verdict is the largest payout ever made against Tripler Army Medical Center, Fried said.