Defense Secretary Jim Mattis on Tuesday said the poisoning of a former Russian spy and his daughter on British soil was “attempted murder” by the Russian government, and that Putin should be held responsible, The Hill reported. 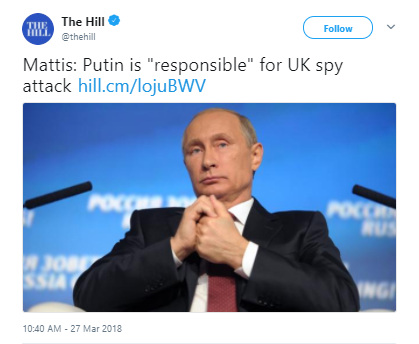 Mattis, calling the nerve agent used in the March 4 attack in Salisbury, England, a “weapon of mass destruction,” said that it was the first chemical weapons attack in Europe since World War II.

Sergei Skripal, 66, and his 33-year-old daughter Yulia were targeted in the attack. The U.K. government said the nerve agent used in the attack was Novichok.

Asked by reporters on what he thought about Moscow’s actions, Mattis said: “Attempted murder of a man and his daughter. How’s that for starters?”

“Russia has chosen to be a strategic competitor, even to the point of reckless activity,” Mattis said of Russia’s behavior, citing several recent Russian activities including Russia’s annexation of Crimea and interference in the 2016 Presidential election.

“They are doing things they think are deniable,” he said.

“So they’re trying to break the unity of the Western alliance,” he added, referring to NATO.

When asked by reporters if he thought Russian President Vladimir Putin was aware of the poisoning of the ex-Russian spy, Mattis said he wouldn’t speculate.

“Certainly he’s responsible as the head of state. We all can draw our own conclusions,” Mattis said.

On Monday, President Donald Trump announced that he is expelling 60 Russian officials from the U.S. in response to the attack. More than 20 other countries are expelling Russian diplomats from their countries.

NATO also announced Tuesday that it was expelling seven diplomats from Russia’s mission to the alliance in Brussels, and denying accreditation to three more workers.