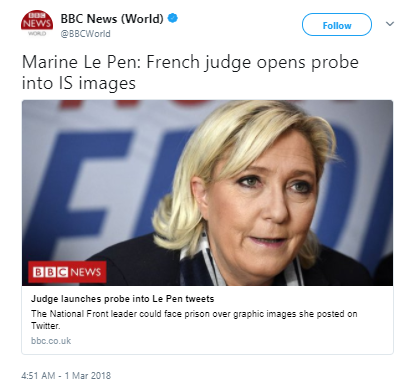 The prosecutor’s office in Nanterre said the charges were for distributing “violent messages that incite terrorism or pornography or seriously harm human dignity.”

The 2015 tweets in the wake of the ISIS attacks on Paris showed ISIS executions, including the execution of James Foley, an American journalist. The other images were of a man in an orange jumpsuit being run over by a tank and a man being burned alive in a cage.

“Daesh is THIS,” she wrote in a caption. She later deleted the image of Foley after receiving a request from his family. Le Pen said she was not aware of Foley’s identity when tweeting the image.

On Thursday, Le Pen defended her decision to tweet the images.

“In other countries this would have earned me a medal,” she told AFP.

“If they are trying to silence me, they will not succeed,” she said in another interview.

Last May, Marine Le Pen lost to Emmanuel Macron in the presidential vote.