A former Navy sailor from Texas has been convicted of distributing video that shows puppies drowning, as well as being in possession of videos depicting the torture and killing of animals, according to the U.S. Attorney’s Office for the Southern District of Texas, and he could face up to seven years in prison and a $250,000 fine.

O’Sullivan received an “other than honorable” discharge from the Navy in September 2017.

His sentencing takes place on Aug. 2. He faces up to seven years in federal prison and a possible $250,000 maximum fine. 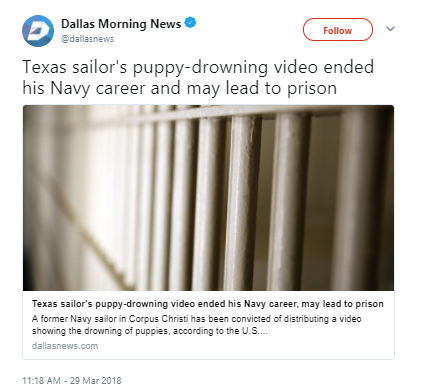 O’Sullivan was interviewed at Naval Air Station Corpus Christi, where he was stationed at the time.

“O’Sullivan admitted he distributed a video to an individual in Montana that depicted the drowning of puppies in a river,” according to the release. “That individual admitted to receiving the video.”

“Law enforcement conducted a forensic search on his digital devices, which resulted in the discovery of the video depicting the drowning of puppies and other animal crush videos,” according to the U.S. Attorney’s Office. “In one video, a dog’s mouth is closed with duct tape as it is set on fire. In another, a dog is thrown off a high-rise building. Other videos depict mice and baby chicks being ground-up in a blender.”