The Justice Department is again examining a pardon request from a former U.S. Navy sailor who went to jail for taking photos of classified parts of a nuclear submarine, Fox News recently reported.

Kristian Saucier received a 1-year jail sentence for mishandling classified information after taking six photos inside the USS Alexandria, a nuclear submarine, which he was aboard from 2007 to 2012. Saucier served his sentence and was released from prison this past October.

The Department of Justice (DOJ) letter that it is re-examining the pardon comes less than a year after Saucier received a letter denying his pardon request due to it not meeting the right criteria, including having a five-year waiting period, Fox reported.

During his Presidential campaign, President Donald Trump slammed federal officials for going after Saucier but not punishing Hillary Clinton for her use of a private server to handle classified emails.

Due to an other-than-honorable discharge, Saucier doesn’t receive veterans benefits.

His discharge came after he took six pictures of classified areas inside the USS Alexandria at the age of 22, while working as a machinist’s mate at Naval Submarine Base New London in Groton, Connecticut.

Saucier took several photos of the reactor compartment. Upon learning he was in trouble, he destroyed a laptop, a memory card and a camera to ensure no one saw the photos.

Saucier tried using Hillary Clinton’s use of classified information to his advantage by giving it as an example after Clinton wasn’t punished. 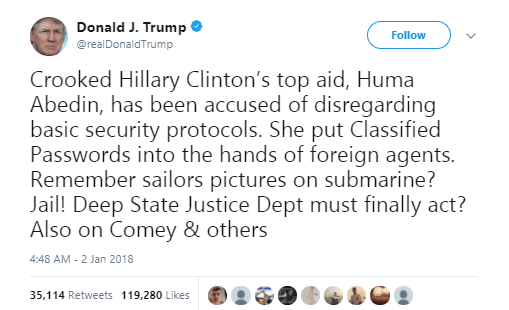 “We’re hopeful with that tweet today,” Saucier said in an interview with Fox News. “He [Trump] mentioned me quite a few times when he was campaigning, and said it was a double standard how Hillary Clinton and Huma Abedin were handled. I mishandled low-level class information and they went after me with the full weight of the government. Hillary Clinton and Huma Abedin flagrantly mishandled high-level information, making it available to a pedophile, and they get away with it.”

One of Saucier’s attorneys, Ronald Daigle, said President Trump’s tweet gave them hope for a pardon.

“It seemed like we’d slipped off the radar,” Daigle told Fox News. “This tweet has renewed our hope that President Trump sees the injustice. He has identified the injustice several times.”

“I think my family and I have been punished enough,” Saucier told the Washington Examiner. “I made an innocent mistake as a kid, it wasn’t planned like Hillary Clinton and them blatantly flouting the law.”

“We’re struggling,” he said. “No one will hire me because I’m a felon… All the skills I worked so hard for in the military are useless.”

Saucier works at least 70 hours a week as a garbage collector in Vermont. He said his house where he, his wife and his two-year old daughter live is in foreclosure and he is unable to pay his bills.