Hershel “Woody” Williams, who is a Medal of Honor recipient, served in the Marine Corps and Marine Corps Reserve for 20 years before retiring as a Chief Warrant Officer 4 (CWO4).

One of the highlights of his military service, which he discusses in a video interview, occurred on Feb. 23, 1945, when he led a unit that managed to successfully take out seven “pillbox” bunkers.

While Williams and his division were on their way to Iwo Jima, they were told that they likely wouldn’t be getting off the ship, since 40,000 troops were already deployed to the small island, which was 2.5 miles wide and 5 miles long.

He was part of the 3rd Marine Division, which was the reserve division of the 4th and 5th Marine divisions.

Troops use a flamethrower in Iwo Jima (YouTube/Wilhelm Ax)

Marine Corps officials expected that they would only be there for five days, which ended up being 38 days.

There was limited intelligence about the island prior to the Battle of Iwo Jima. Once on the island, Williams and his fellow troops had no issue getting across the first air field, but they were stopped by pillboxes, which are reinforced concrete bunkers. Inside of the pillboxes were Japanese troops who were actively firing shots with their rifles at the American troops through apertures that were in the walls of the bunkers. 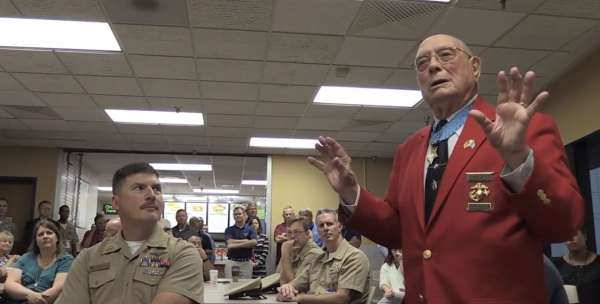 Williams shares his story with Marines and civilians. (NSA Orlando/YouTube)

Due to the toughness of the pillboxes, the Americans had no choice but to use flamethrowers to eliminate the enemies.

They were losing Marines and were having limited success with using artillery and bazookas to kill the Japanese troops. Williams was asked by a superior officer to use his flamethrower skills to lead a team to take out the pillboxes.

Williams took on the challenge and crawled towards the pillboxes with a 70-pound flamethrower unit on his back.

With the support of four Marines who provided him with cover fire, Williams managed to eliminate seven of the pillboxes over a period of four hours. His unit would shoot at the pillboxes while he tried to get close to them with the flame. Once on top of the pillboxes, Williams released fire through their air vents, which instantly killed the enemy troops that were inside.

With the help of Williams’ actions, the Marines were able to take control of the island, which was a major blow to the Japanese.

Once World War II was over, Williams was invited to the White House and was presented with the Medal of Honor by President Harry Truman.

Williams was presented with the Medal of Honor for “unyielding determination and extraordinary heroism in the face of ruthless enemy resistance.”

Watch the video below to learn more about Williams’ story: