California teacher who trashed military in viral rant is fired

A California teacher who called U.S. service members the “lowest of the low” during an anti-military rant in class that was captured on video has been fired, the school board president said, the Los Angeles Times reported this week.

Board of Education President Aurora Villon said El Rancho Unified School District history teacher Gregory Salcido was fired following a unanimous vote by the school board. Salcido has 30 days to appeal the decision. 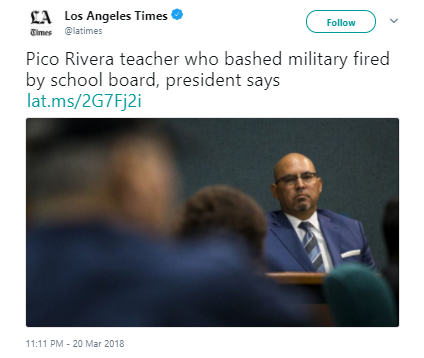 A series of videos was posted to Facebook in which a history and social studies teacher at El Rancho High School in Pico Rivera, California, can be heard completely disrespecting and trashing the U.S. military and the men and women who serve the country – all because one of his students was wearing a Marines sweatshirt in class.

The videos, taken on Jan. 19 by a student using a cell phone, went viral, with one being viewed nearly eight million times.

In the videos, the male teacher goes on a rant for several minutes. He says he doesn’t know how anyone ends up joining the military.

“It’s because you have no other options,” the teacher says.

“The classroom should never be a place where students feel that they are picked at, bullied, intimidated,” Villon told the Los Angeles Times.

Salcido faced serious criticism after disrespecting the women and men who serve in the United States Military.

Salcido’s comments stemmed from seeing a student wearing a Marines sweatshirt in class. A student in the classroom recorded the teacher’s rant on their phone and the video received millions of views.

While constantly berating the military and those who serve, the teacher also asks why anyone would “wear something you can’t even support.”

“Don’t you ever bring the military into this again,” he says. “We don’t let pimps into school. Is anyone interested in being a hoe? … They’re going to lie to you.”

American Military News had spoken to the student’s mother, who asked that her child not be named, lest they face repercussion at school.

The student who was wearing the Marine sweatshirt in the classroom said he was called out by Salcido in front of the class to find out why he was interested in joining the Marine Corps.

The student’s mother’s friend posted the videos to Facebook. One has been viewed nearly eight million times.

Chief of Staff John Kelly – a retired Marine Corps general – voiced his opinion on the teacher publicly during a Fox Radio interview in January.

“Well, I think the guy ought to go to hell. I just hope he enjoys the liberties and the lifestyle that we have fought for,” Kelly said.

During a February City Council meeting, Salcido said he has received numerous threats to his family, including raping his wife and killing him.

Salcido attempted to apologize for his comments by saying that his comments about service members “had nothing to do with their moral character.”

“I don’t think it’s all a revelation to anybody that those who aren’t stellar students usually find the military a better option… That’s not a criticism of anybody. Anything I said had nothing to do with their moral character,” he said, the Los Angeles Times reported.

“I do believe the military is not the best option for my students,” he added. “That does not mean I’m anti-military, because I’m not.”

Salcido called the incident “probably the most exaggerated situation I’ve ever seen.”

In January, Pentagon Spokeswoman Amber Smith said the comments made by Salcido were “uninformed.”

“I have seen maybe a few things that he said that were very uninformed, and I think that’s an excellent example of who we would like to connect with, and inform them with an accurate image of those who are serving and why they serve,” Smith had said.

Salcido did not return a request for comment from American Military News back in January.

Salcido is no stranger to controversy and is apparently known for his unconventional world views that he openly shares with his students. He was reportedly placed on administrative leave from the school district in August 2017 over his questionable classroom conduct.