Officials investigate near a red vehicle believed to be that of the Austin bomber on I-35 in Round Rock on Wednesday March 21, 2018. (Jay Janner/Austin American-Statesman/TNS) AUSTIN CHRONICLE OUT, COMMUNITY IMPACT OUT, TV MUST CREDIT PHOTOGRAPHER AND STATESMAN.COM ON SCREEN, MAGS OUT, NEWSPAPERS ONLY ONLINE. Contact source for special permissions
March 29, 2018 Mary Huber - Austin American-Statesman
Share
Tweet
Flip

When he looks back at what the Austin bomber “did to our community, he was a domestic terrorist for what he did to us,” Interim Austin Police Chief Brian Manley said at a panel discussion Thursday that focused on how police, the media and the community responded to the Austin bombings. 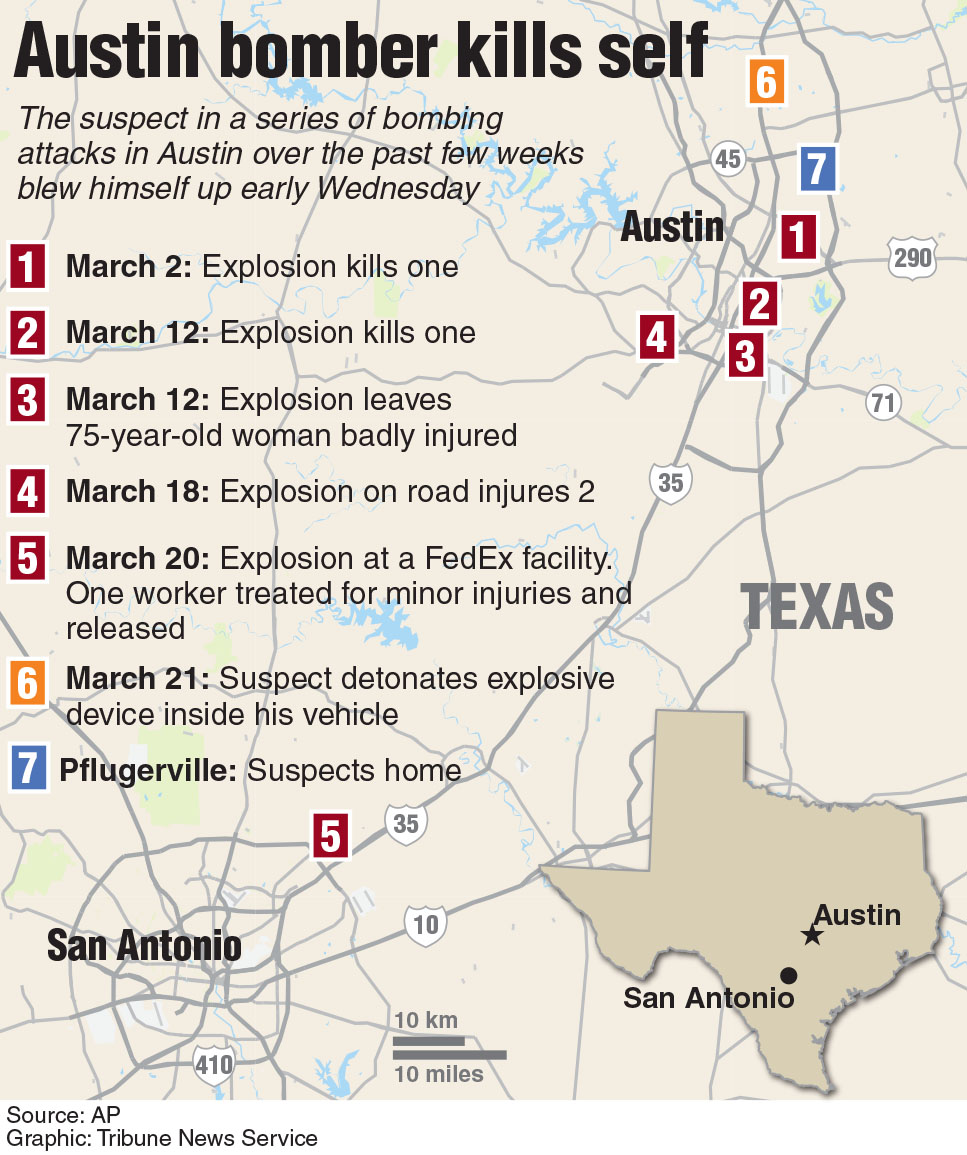 “This is a distinction I wanted to make today,” Manley said. Knowing the case would be in the legal system at some point, he said, he was trying to be sensitive about the terminology he used during the investigation.

“I was so focused that we put a stop to it,” the chief said, but now he says he comfortable calling the bombings domestic terrorism “for what it did to our community.”

The nephew of Esperanza Herrera, a 75-year-old woman critically injured by a package bomb March 12, was one of about 100 people in the audience who attended the discussion hosted by KUT-FM at the George Washington Carver Museum in East Austin.

Zeke Prado said that while the city has banded together, he was not happy with how the bomber, Mark Conditt, was initially characterized.

“He terrorized the city of Austin,” Prado said.

Another audience member, Kristina Brown of Counter Balance ATX, said Manley’s admission that the bombings were the work of a “domestic terrorist” was “too little, too late.”

“We don’t know, we will not know what that qualification more early in the investigation would have done, what resources would have been provided to make sure that more lives were not lost,” Brown said.

The panel also explored the apparent racial tensions that some community leaders said were exposed by the bombings and the investigation. The first three victims were black or Hispanic, leading some neighbors to worry that the attacks were racially motivated.

Austin Justice Coalition leader Chas Moore said a different standard had been applied to Conditt, a white resident of Pflugerville.

“Because he was white, we gave him the benefit of being a human first,” Moore said.

He also told the audience that it was a “myth” that Austin is a “big, beautiful diverse pie.”

“Our white brothers and sisters are going to have to learn how to be comfortable while being uncomfortable talking about race,” Moore said.