American soldier found dead on South Korean US Army base

An American soldier was found dead at an Army base in South Korea Friday morning, Stars and Stripes first reported.

The soldier, assigned to the 35th Air Defense Artillery, was stationed at Camp Carroll in Daegu City, South Korea. 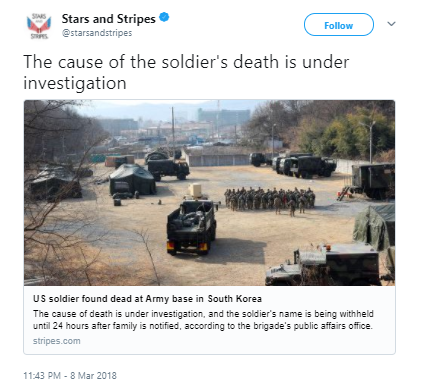 A 35th Air Defense Artillery spokesman said the death of the soldier is under investigation and a name will be provided following notification of the family.

Roughly three months ago, another American soldier was killed in South Korea.

Sgt. Eric Schenck, 33, was killed in December when a truck hit into an ambulance and another vehicle that were pulled over to the side of a road following an earlier collision south of Seoul.

Schenck was driving a military vehicle when he was rear-ended on an interchange north of Camp Humphreys. After getting out of the vehicle to inspect the damage, the truck hit into the two vehicles, killing Schenck.

There are roughly 28,500 American troops currently stationed in South Korea.