The United States began its drawdown of troops from Iraq, an Iraqi spokesman and Western contractors told the Associated Press.

“The battle against Daesh has ended and so the level of the American presence will be reduced,” spokesman Saad al-Hadithi said. 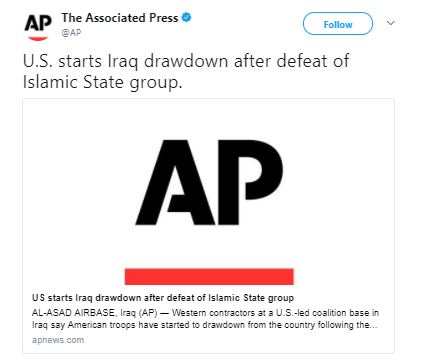 The drawdown has only recently begun and it does not mean that the United States is pulling out of the country entirely.

According to the Western contractors, the drawdown began last week and a number of U.S. troops have left bases on daily flights.

“Continued coalition presence in Iraq will be conditions-based, proportional to the need and in coordination with the government of Iraq,” Coalition Spokesman Army Col. Ryan Dillon told the Associated Press.

There were roughly 9,000 U.S. troops in Iraq last September, according to a Pentagon report. That number will be reduced by 60 percent. an Iraqi official told the Associated Press.

“We’ve had a recent change of mission and soon we’ll be supporting a different theater of operations in the coming month,” U.S. Army 1st Lt. William Raymond told the Associated Press.

The drawdown comes amid increased deployments to Afghanistan to fight the Taliban. The number of troops in Afghanistan has grown from roughly 8,500 troops last year to 14,000 today.

Iraq declared victory over ISIS in December 2017, after Iraqi forces eliminated some of the remaining forces of ISIS.

The move comes just weeks after Defense Secretary Jim Mattis announced the United States’ new defense strategy. In the announcement, Mattis said the U.S.’ new focus would be on rising powers like China and Russia as opposed to terrorism.