The U.S.-led coalition in Syria killed an estimated 100 pro-regime fighters under Bashar Assad in Syria on Wednesday, according to the Coalition.

The strikes were carried out in self-defense, according to officials, who said the strikes were conducted after 500 pro-regime troops “initiated an unprovoked attack” against a Syrian Democratic Forces (SDF) headquarters where Coalition service members were located. 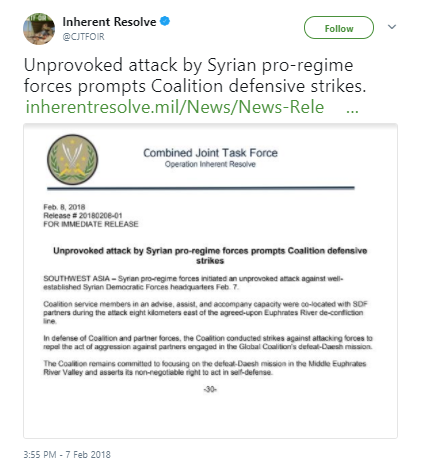 The attack on the headquarters appeared “to be a coordinated attack on Syrian Democratic Forces approximately 8 kilometers east of the Euphrates River de-confliction line in Khusham, Syria,” Col. Thomas Veale, a public affairs officer for the Inherent Resolve Soalition, told Military Times.

The pro-regime troops used mortar fire, artillery, and T-55 and T-72 main battle tanks with support from multiple-launch rocket systems to carry out the attack.  Roughly “20 to 30 artillery and tank rounds landed within 500 meters” of the headquarters before the U.S.-led coalition carried out strikes in self-defense.

No U.S.-led coalition forces were injured in the attack, but one SDF member was wounded.

“We suspect Syrian pro-regime forces were attempting to seize terrain SDF had liberated from Daesh in September 2017,” Veale told Military Times. “[Pro-regime forces] were likely seeking to seize oilfields in Khusham that had been a major source of revenue for Daesh from 2014 to 2017.”

Khusha is five miles east of the de-confliction line that separates Russian-backed and U.S.-backed forces in Syria.

“We also cannot speculate on the exact make-up of the Syrian pro-regime forces who conducted the attack at this time,” Veale said.

The U.S.-led coalition said it was aware of a pro-regime build-up over the past week and informed Russia of that build-up.