“We are asking the U.S. side to explain what happened and it’s cause, and we fully demand the U.S. side take prevention measures,” Japan’s Defense Minister Itsunori Onodera said at a press conference.

An F-16 jet assigned to Misawa Air Base in Japan was forced to “jettison two external fuel tanks into an unpopulated area” due to an engine fire, according to a U.S. military statement. The aircraft landed back at Misawa Air Base after dumping the fuel tanks. 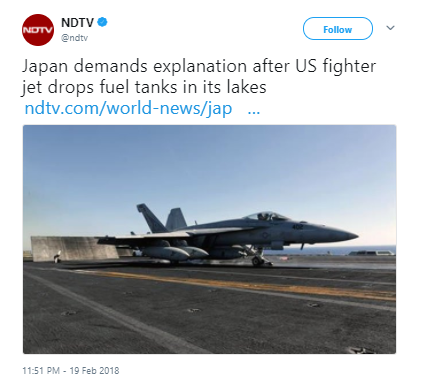 “The safety of our airmen and our Japanese neighbours is our number one priority during flying operations,” said Col. R. Scott Jobe, the 35th Fighting Wing commander. “We will conduct a thorough investigation to determine the root cause of this incident.”

Even though no injuries were reported, the aircraft landed a few hundred meters away from fishermen at the lake.

“I was surprised to see a big splash. Imagine being hit by one of those. It is a good thing no one was hurt,” said fisherman Masahiko Yamada, Japan Times reported.

“Ensuring the safety of local residents is the basic premise (of base) operations. We strongly urge the U.S. side to see that safety is ensured, the cause is investigated and measures are taken to avoid the same thing from happening again,” Prime Minister Shinzo Abe said at a meeting.

All fishing activities on Lake Ogawara have been halted until the tanks have been collected and the oil debris is cleared, Mainichi Japan reported.

All 385 kilograms of basket clams caught that day on the southern side of the lake were discarded as a result of the oil debris.

Local fishermen are now seeking compensation for the fishing ban. Fishermen are losing up to $37,000 every day in shellfish during peak season, Stars and Stripes reported.

In December this past year, a CH-53E Super Stallion helicopter window fell onto the grounds of an Okinawan elementary school where children were playing. In October of last year, a U.S. military helicopter went up in flames after making an emergency landing in Okinawa.

In January, there were three separate emergency landings in Okinawa.