President Donald Trump on Friday floated the idea of pushing for a policy change that would allow troops to carry personal weapons on military bases.

Currently, troops must either leave their weapons at home or check them in at the gate. The Defense Department created the policy to help mitigate accidental shootings and potential suicides, according to Military.com.

Trump shared his views on the issue while on stage at the annual Conservative Political Action Committee (CPAC) conference in Maryland.

“If we can’t have our military holding guns, it’s pretty bad. I’m going to look at that whole policy on military bases,” Trump said.

During his speech, Trump referred to a shooting that occurred in July 2015 in Chattanooga, Tennessee, where four Marines and a sailor were killed. He pointed to it as an example of a situation where concealed carry could have saved lives.

“We had a number of instances on military bases, you know that,” Trump said. 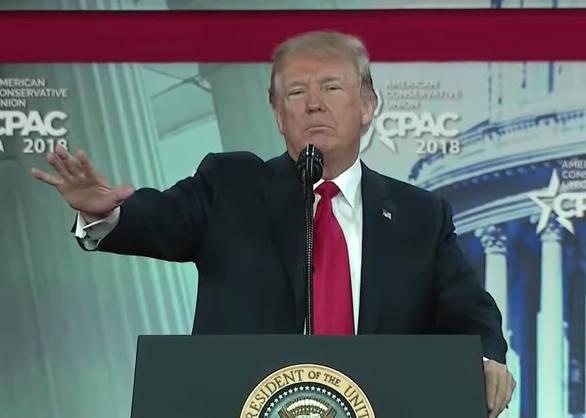 The incident occurred at a strip shopping mall and a U.S. Naval Reserve Center that was several miles away. Then-FBI Director James Comey said that the killer, who was Muhammad Youssef Abdulazeez, was “motivated by foreign terrorist organization propaganda.”

Abdulazeez carried out the attack in a drive-by shooting. He first shot at the recruiting center and then drove to the U.S. Naval Reserve Center, which resulted in him getting killed after getting into a shoot-out with police.

According to Trump, the victims of the attack “were on a military base in a gun-free zone.”

“You know the five great soldiers from four years ago, three of them were world-class marksmen. They were on a military base in a gun-free zone,” Trump said as he described the incident.

“They were asked to check their guns quite far away. And a maniac walked in, guns blazing, killed all five of them. He wouldn’t of had a chance if these world-class marksmen had – on a military base – access to their guns,” Trump said.

Trump isn’t the only advocate for the elimination of gun-free zones. During his Senate confirmation hearing in 2015, Army Chief of Staff Gen. Mark Milley said that “in some cases I think it’s appropriate” that recruiters should be armed for self-defense.

“I think under certain conditions – both on military bases and in outstations, recruiting stations, reserve centers – we should seriously consider it,” Milley had said.

'Let them know they have family.' Homeless vets laid to rest at Fort Jackson