A college student says she was pressured into flushing her “emotional support hamster” down an airport toilet after Spirit Airlines gave her conflicting information about whether she could have it with her on a flight, the Miami Herald reported.

Belen Aldecosea, 21, told the Herald that she spoke to Spirit Airlines about having her dwarf hamster, Pebbles, on her flight from Baltimore to South Florida on Nov. 21, 2017. 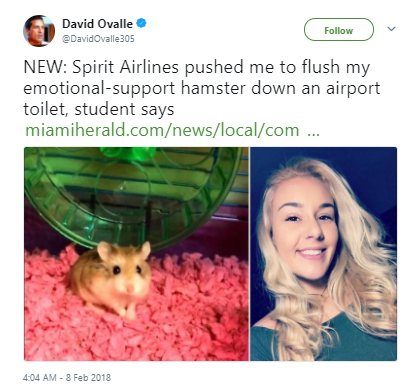 When Aldecosea brought the hamster to the airport, she was told rodents were not allowed on the plane. She said that she had few options because she had to get home to her family due to a medical issue. She said her friends were hours away at the time and couldn’t take the hamster.

Aldecosea claims that a Spirit Airlines employee suggested she flush the hamster down the toilet or let the animal go free.

Aldecosea said she took a later flight trying to figure out what to do with the hamster and tried unsuccessfully to rent a car to go home.

She decided to flush the hamster down the toilet.

“She was scared. I was scared. It was horrifying trying to put her in the toilet,” Aldecosea said. “I was emotional. I was crying. I sat there for a good 10 minutes crying in the stall.”

Aldecosea is now considering filing a lawsuit against Spirit Airlines for having pressured her into flushing the hamster down a toilet.

“After researching this incident, we can say confidently that at no point did any of our agents suggest this guest (or any other for that matter) should flush or otherwise injure an animal. It is incredibly disheartening to hear this guest reportedly decided to end her own pet’s life,” spokesman Derek Dombrowski told Fox News.

“One phone call could have saved this animal, or some kind person at the airport could have helped. Flushing a living being down the toilet is not only cruel but also illegal, and both the person who killed this animal and Spirit Airlines – if an employee did, in fact, advise the woman to drown the hamster – should be charged. This must have been a horrific, terrifying death,” PETA Senior Vice President Daphna Nachminovitch told Fox News.

Aldecosea said she felt like she chose the right option at the time because she needed to get home and she didn’t want the hamster to freeze to death and be on its own.

The airline previously offered Aldecosea a voucher for a free flight to select cities, which she declined.

Aldecosea said her doctor certified her hamster as an emotional support animal and she had the certificate with her to prove the authenticity of it.

While in school at Wilson College, in Pennsylvania, Aldecosea developed a growth in her neck. She bought Pebbles to comfort her. She was traveling home that day to have the growth removed from her neck.