A soldier died in an accidental shooting at an Oregon armed force training center, the Clatsop County Sheriff’s Office said in a press release.

The sheriff’s office said members of a regular U.S. Army unit that was conducting training at Camp Rilea reported a gunshot discharge in the housing area.

The soldier, whose name has yet to be released, died in the emergency room at Columbia Memorial Hospital.

The soldier was with the 2nd Battalion, 75th Ranger Regiment, The Oregonian reported. 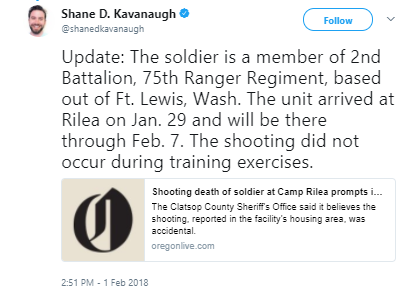 Camp Rilea is the primary training facility for the Oregon National Guard.

The Clatsop County Sheriff’s Office is investigating the incident.