North Korean officials cancelled a secret meeting that was scheduled with Vice President Mike Pence just two hours before the meeting was scheduled to take place while both parties were at the Winter Olympics in South Korea.

The State Department late Tuesday confirmed that Pence was going to meet with Kim Yo Jong, the sister of North Korean dictator Kim Jong Un. Jong was in South Korea to observe the Winter Olympics in PyeongChang, as was Pence.

State Department spokesperson Heather Nauert tweeted Tuesday that a “possibility arose” of a brief meeting with North Korean delegates who were also at the Olympic Games.

During @VP Pence’s recent visit to South Korea to demonstrate allied resolve and support American athletes, the possibility arose of a brief meeting with the North Korean delegation leaders. #DPRK

Pence was reportedly going to bring up that North Korea should abandon its ballistic and nuclear missile program aspirations.

But the meeting was later cancelled at the last minute, Nauert said.

“At the last minute, [North Korean] officials decided not to go forward with the meeting,” she wrote. “We regret their failure to seize this opportunity. We will not apologize for American values, for calling attention to human rights abuses,or for mourning a young American’s unjust death.”

At the last minute, #DPRK officials decided not to go forward with the meeting. We regret their failure to seize this opportunity. We will not apologize for American values, for calling attention to human rights abuses, or for mourning a young American’s unjust death.

Otto Warmbier’s father was Vice President Pence’s guest at the Olympics this year. 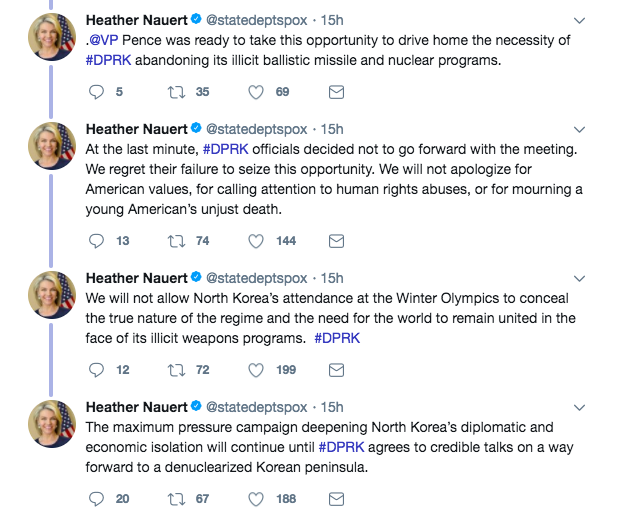 The State Department confirmed that Vice President Mike Pence was going to meet with North Korean delegates, but they cancelled. (Twitter)

It was an historic albeit apprehensive moment when North and South Korean officials met and shook hands at the Olympics; North Korea often deploys diversion tactics and tries to show a positive image to the world, while the country is run into the ground by a leader who wants to create a ballistic and nuclear missile arsenal that can destroy the United States.