Indianapolis Colts linebacker Edwin Jackson and another man were stuck and killed by an illegal immigrant in a drunk driving accident, Fox News reported.

Indiana State Police said the man accused of hitting Jackson and ride-sharing operator Jeffrey Monroe of Avon, Indiana, was a Guatemalan citizen who was in the United States illegally and had been deported twice.

Monroe pulled his car off to the side of the road in Indianapolis around 4 a.m. on Sunday because Jackson had become ill, according to state police.

Both Jackson and Monroe were then struck by a Ford F-150. When a state trooper responded to the crash, he accidentally struck the body of one of the victims that had been thrown into the middle lane of the interstate from the crash. The state trooper tried slowing down before hitting the body.

The driver of the Ford was identified as Manuel Orrego-Savala, but gave them an alias at the scene – Alex Cabrera Gonsales – before attempting to flee on foot. 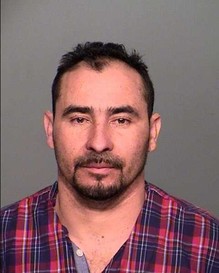 Orrego-Savala was taken to the Marion County Jail, and is accused of intoxicated driving and driving without a license.

Orrego-Savala’s blood alcohol level was almost four times the legal limit at the time of the crash, The Indianapolis Star reported.

U.S. Immigration and Customs Enforcement (ICE) released a statement saying that Orrego-Savala was previously convicted of driving under the influence in 2005 in Redwood City, California.

“We were heartbroken to hear the news of Edwin Jackson’s passing,” the Colts organization said in a statement. “Edwin was loved by all in the Colts organization. We admired his outgoing personality, competitive spirit and hard-working mentality. He was well-respected among all with whom he crossed paths, and he will be greatly missed in our locker room and throughout our entire organization. We also understand that another person lost his life in the accident, only adding to our sorrow on this day. We are shocked and saddened by this tragedy, and our thoughts and prayers are with the families of both men during this difficult time.”

“I was very saddened to hear of the passing of Indianapolis [Colts] linebacker Edwin Jackson,” Vice President Mike Pence tweeted Monday night. “This is a great loss for the entire Indiana community. My prayers are with his family in their time of grief.”

President Donald Trump tweeted about Jackson’s death, giving his prayers and best wishes to the Jackson family. Trump also called for Democrats to be tougher on illegal immigration.

“So disgraceful that a person illegally in our country killed [Colts] linebacker Edwin Jackson. This is just one of many such preventable tragedies. We must get the Dems to get tough on the Border, and with illegal immigration, FAST,” Trump tweeted.

“My prayers and best wishes are with the family of Edwin Jackson, a wonderful young man whose life was so senselessly taken,” Trump tweeted.