ISIS leader Abu Bakr al-Baghdadi was injured during an airstrike in May 2017 and wasn’t in control of the terrorist organization for five months due to his injuries, U.S. officials told CNN this week. 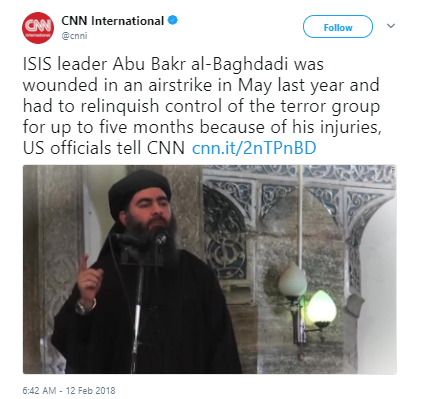 Abu Bakr al-Baghdadi was reportedly left unable to walk due to “fractures to the bones and legs” that were likely caused as a result of previous airstrikes, said Abu Ali al-Basri, Director General of Iraq’s Intelligence and Counter-terrorism Office at the Ministry of Interior.

“We have irrefutable information and documents from sources within the terrorist organization that al-Baghdadi is still alive and hiding,” he said.

Al-Baghdadi is hiding in the desert in Syria, northeast of Deir Ezzor Province, he added.

Baghdadi was recently admitted to a hospital in the Jazeera desert for his wounds, which were described as severe but not life-threatening.

There have been several claims of al-Baghdadi’s death over the past several years. Russia claimed it killed the ISIS leader during an airstrike in May 2017, but provided no evidence of his death.

In September 2017, ISIS released a rare audio recording of al-Baghdadi urging the group to continue its fight in Iraq and Syria.

In the 46-minute audio recording, al-Baghdadi praised the terror group for its continued fight despite the loss of Mosul last year and several parts of Raqqa, which has since been re-captured. He also called on supporters and fighters to carry out attacks on the west.

Despite having lost almost all of its territory in Iraq and Syria, ISIS still controls small areas of territory near the Syria-Iraq border. This is likely the location of al-Baghdadi, according to U.S. intelligence officials.