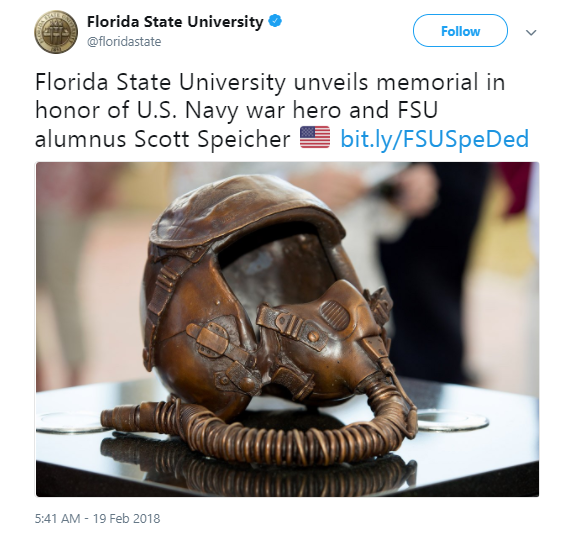 Speicher, a U.S. Navy pilot, was the first American combat casualty of the Persian Gulf War when his plane was shot down on Jan. 17, 1991.

The memorial features a bronze flight helmet similar to the one that Speicher wore.

“It’s important that future generations understand who he was and what he did for his country,” FSU President John Thrasher said at the dedication ceremony. “Twenty-five years ago, we named this tennis center in his honor. Today, we continue to tell the story of Scott Speicher with the dedication of this beautiful memorial and plaza.”

After graduating with a degree in business administration in 1980, Speicher joined the U.S. Navy and flew F/A-18 Hornets.

In the early 1990s, Speicher earned the rank of lieutenant commander and was assigned to VFA-81 aboard the USS Saratoga out of Mayport Naval Station in Florida during the time of his deployment.

The ceremony was part of Military Appreciation Weekend by the school’s tennis team. The memorial was a collaboration between Speicher’s family, FSU’s Grounds and Landscape Operations, Master Craftsman Studio, Mad Dog Construction and Student Veterans Center.

She brought a special tennis ball that she had kept with her for the last 25 years to the ceremony. That ball was the first one used when FSU dedicated its new tennis facility in 1993. The tennis facility was named the Scott Speicher Tennis Center.

“We are so honored and humbled that our facility, our home for student-athletes and student-veterans, is built upon the bravery and uncompromising spirit of Scott Speicher and his legacy,” Hyde said. “Our tennis programs will continue to do our very best to honor Scott, his service, his sacrifice, and most importantly, his family, to the absolute best of our ability.”

After having been shot down in 1991, Speicher was reclassified in 2001 as missing in action due to evidence that he ejected from his aircraft. A year later he was promoted to the rank of captain.

Speicher’s remains were discovered in 2009, which changed the way the military handled cases of missing service members.

“That will continue to save lives, as long as we have conflicts, and he’s brought back hundreds of veterans who’ve been repatriated,” said Speicher’s friend and fellow Navy pilot Buddy Harris. “That’s his legacy along with his family; he’d be so proud of them. We all have the Speicher spirit, and we will continue that Speicher spirit forever.”