UPDATE, 3:15 p.m. EST, Feb. 16: Florida Gov. Rick Scott has called for the FBI director, Christopher Wray, to step down after the FBI earlier Friday admitted it failed to investigate a tip-off about Nikolas Cruz, the accused shooter who killed 17 people this week.

“The FBI’s failure to take action against this killer is unacceptable,” Scott said. “The FBI has admitted that they were contacted last month by a person who called to inform them of Cruz’s ‘desire to kill people,’ and ‘the potential of him conducting a school shooting.'”

“Seventeen innocent people are dead and acknowledging a mistake isn’t going to cut it. An apology will never bring these 17 Floridians back to life or comfort the families who are in pain. The families will spend a lifetime wondering how this could happen, and an apology will never give them the answers they desperately need,” Scott said.

The FBI received a tip Jan. 5 from someone who knew Cruz, and that person gave the FBI information about Cruz’s “guns, desire to kill people, erratic behavior and disturbing social media posts,” ABC 10 reported.

A YouTube blogger told CNN that he tipped off the FBI to a user with the same name as the Florida high school mass shooting suspect, after he saw a comment from a “Nikolas Cruz” that raised concern this past September.

Nikolas Cruz is also the name of the suspect in the high school shooting in Florida that left 17 people dead and several others injured. Cruz arrived at Broward County Jail in Fort Lauderale for booking Thursday morning. The 19-year-old is charged with with 17 counts of premeditated murder.

The blogger, Ben Bennight from Mississippi, told CNN he contacted the FBI immediately back in September, and also followed up with a phone call. Field agents from the FBI’s Mississippi office interviewed Bennight at the time, about five months ago.

The FBI on Thursday confirmed that it had been tipped off and investigated the threat, but that nothing came of it.

FBI confirms in 2017 it investigated online threat “I’m going to be a professional school shooter.” Nothing came up.

He told CNN he was again contacted by the FBI – this time, after the shooting on Wednesday, and that agents again conducted an interview with him. 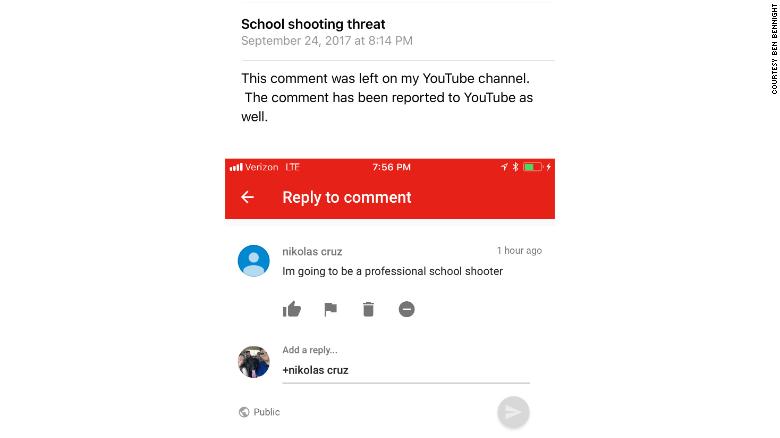 Cruz is a former student of the Marjory Stoneman Douglas High School in Parkland, which has about 3,000 students. He was also reportedly part of the U.S. Army Junior Reserve Officers’ Training Corps program (JROTC), The New York Post reported.

He legally purchased an AR-15 rifle about a year ago.

Cruz has a history of mental illness. The Washington Post reported that Cruz was being treated at a mental health clinic but then stopped treatment, and that his mother passed away around Thanksgiving.

The troubled 19-year-old had also been expelled from the high school last year.

Trump on tragic Florida school shooting: 'We must actually make that difference'