The family of a Vietnam veteran who served in the Army for more than 20 years and was awarded a Silver Star is seeking the return of the medal that was reported stolen, according to KWCH.

Sankey served in the Army for 21 years, served as a special forces soldier, taught at West Point and worked as a U.N. peacekeeper on the border of Israel and Lebanon, according to the Witchita Eagle.

After Sankey passed away, his family visited his storage unit at Hutchinson Self Storage and found that his Silver Star and several other medals for heroism had been stolen. 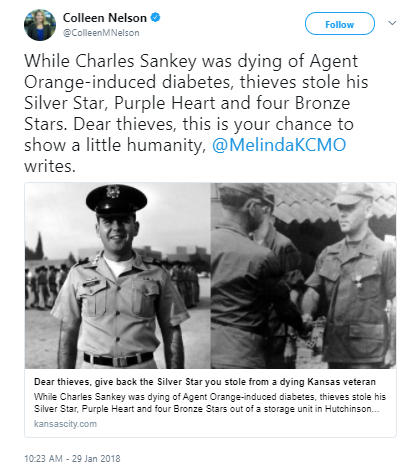 “We came to the storage unit, and it was locked,” said Elma Hunsinger, Charles Sankey’s wife. “We opened it with our key, and when we put the door up, everything was just… there were very few things in there.”

“His Silver Star is… I mean it’s worth everything to the family,” Elma said. “And it’s gone.”

“He was such a giving, helping man… it would’ve really hurt his heart to know that someone had done that,” she added.

Sankey was awarded the Silver Star for his actions on April 1, 1969, when he helped save the lives of several soldiers after coming under fire from the Viet Cong in Gia Dinh Province. Sankey was shot several times during the fight but survived.

“Long story short, saving his entire platoon by himself while getting shot at,” Sankey’s daugher, Gaylan Sankey, said of his actions.

Sankey’s platoon encountered intense rocket, automatic weapons and small arms fire after being hit by a detonated mine. Roughly 90 percent of the forward element became casualties.

“In that incident he was shot 13 times and has 15 or 16 pieces of shrapnel in him,” Gaylan Sankey said. “And he stayed until the very end, until everyone got out and all the casualties got out.”

Sankey’s family is offering a $1,000 reward for the return of the items. The police are also investigating the incident.