An assistant football coach at Marjory Stoneman Douglas High School in Florida is being hailed a hero for jumping into the line of fire and shielding students from gunfire on Wednesday during a mass shooting that killed 17 and injured 15 others.

“It is with great sadness that our Football Family has learned about the death of Aaron Feis. He was our Assistant Football Coach and security guard. He selflessly shielded students from the shooter when he was shot. He died a hero and he will forever be in our hearts and memories,” the football team tweeted. 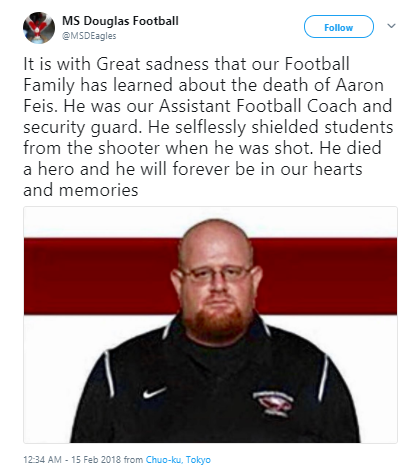 Douglas football coach Willis May told the Orlando Sentinel the Feis was working as a security guard at the school at the time of the shooting.

May said he heard a student say that Feis jumped in between a female student and the shooter, and pushed her through a door to get her out of the way of the gunfire.

According to the Sentinel:

Feis, in his capacity as a school security guard, responded to the original call on the school’s security radio walkie-talkies. Someone asked on the radio if the loud sounds heard were firecrackers, according to May, who also carries a radio.

“Big ol’ teddy bear,” May said of Feis. “Hardcore — he coached hard. Real good line. He did a great job with the [offensive] line. He took pride with working with those guys. Loyalty — I trusted him. He had my back. He worked hard. Just a good man. Loved his family. Loved his brother — just an excellent family man.”

Feis was among 17 killed in the school shooting after a former student opened fire on teachers and students on campus.

“He was a great guy,” sophomore Douglas lineman Gage Gaynor told the Sentinel. “Everyone loved him. Shame he had to go like this. Always gave his all to making us better. Definitely learned a lot from him.”

“The Stoneman Douglas Community has lost the most loving [and] caring man in the universe,” varsity football player Tyler Goodman tweeted. “I love this man with all my heart. I love you coach.”

Feis graduated from Marjory Stoneman Douglas High School in 1999 and went on to coach the school’s junior varsity team for eight years beginning in 2002. He later became a linemen coach for both the junior varsity and varsity teams.

He is survived by his wife Melissa and his daughter Arielle.