An Army veteran armed with an AR-15 and a handgun is taking school protection duties into his own hands by standing guard outside an Indiana high school, WANE-TV 15 reported. 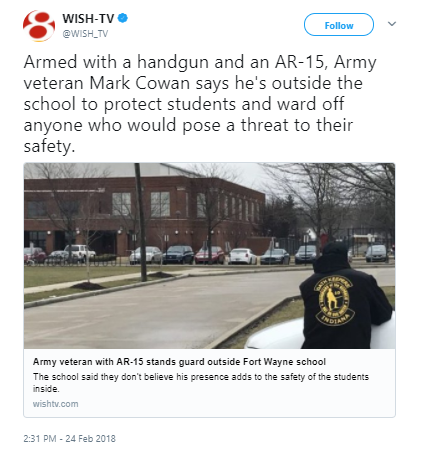 Cowan said he will stand guard outside North Side High School to protect the school.

According to the Oath Keepers website, they identify themselves as veterans and first responders trying to “defend the Constitution against all enemies, foreign and domestic.”

In 2015 and 2016, the Oath Keepers stood guard at a military recruitment center in Fort Wayne after the shooting of four Marines and a Naval officer in Tennessee. They stood guard until safety improvements were made.

Fort Wayne Community Schools told WANE-TV that they do not think Cowan’s presence is beneficial for the safety of students and teachers.

“We take the security of our schools very seriously. We understand he has a right to be out there, but we do not believe it adds to the safety of our students,” Fort Wayne Community Schools said in a statement. “At North Side, as at all of our schools, we have security procedures in place. In addition, at North Side, we have armed police officers in the building every day.”