All three members of the command triad for Naval Mobile Construction Battalion 4 were fired on Feb. 11 after the unit’s executive officer was found drunk and naked in the woods on Camp Shields in Okinawa, Japan.

The unit’s executive officer, or XO – Lt. Cmdr. Jason Gabbard – was relieved after being found wearing only boots in the woods after a gathering for chiefs and officers, Navy Times reported. 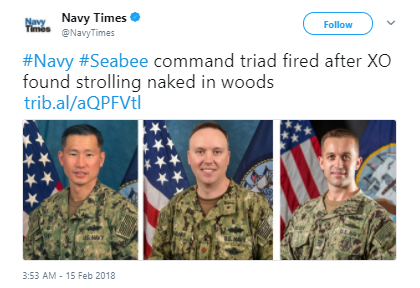 Capt. Nick Yamodis will take over as commanding officer until a replacement can be found.

“Trust is the foundation for everything we do as military professionals, and we expect our service members to conduct themselves with the integrity and character to justify that trust,” Cook said. “When there are any indications that those values are not being followed, we conduct appropriate investigations and take action as necessary.”

While removing an entire unit’s command is uncommon, it has happened previously.

The leaders of the Navy destroyer USS Fitzgerald were relieved of their command last year after the fatal collision that left seven sailors dead.