Woman who inspired ‘Rosie the Riveter’ dies at 96

Naomi Parker Fraley, the woman recognized as “Rosie the Riveter” in a World War II-era poster, died on Saturday at 96 years old.

It wasn’t until 2015 that Fraley was recognized as the inspiration for the famous World War II-era poster depicting “Rosie the Riveter.”

Fraley worked in a Navy machine shop during World War II at Alameda Naval Station in California. While working, a photographer took a picture of her, her daughter-in-law Marnie Blankenship told KATU.

More than 60 years later, Fraley attended a reunion of female war workers at the Rosie the Riveter World War II Home Front National Historical Park in California. While at the convention, she saw a photograph that was promoted as the probable inspiration for the “We Can Do It” poster.

Upon seeing the picture, Fraley recognized the photograph as the one she took more than 60 years ago, despite the caption reading “Geraldine Doyle,” who had been recognized for more than a decade as the inspiration for the poster. Fraley had the same photograph from a newspaper clipping she kept for decades and knew it wasn’t Doyle in the photograph.

In 1942,  Pittsburgh artist J. Howard Miller created the “We Can Do It” poster for the Westinghouse Company’s War Production Coordinating Committee. The poster was displayed in Westinghouse Electric Corporation plants in 1943.

The poster was taken down shortly afterward, but four decades later, the poster was rediscovered and became a symbol for feminism. The name “Rosie the Riveter” was mistakenly given to the woman on the poster. 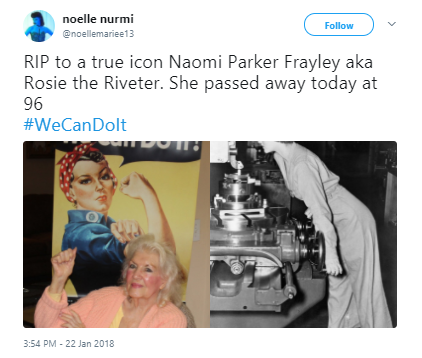 Seton Hall University Professor James Kimble said Doyle was initially recognized as Rosie the Riveter after the photograph of the woman in the factory was released, most likely from the National Archives, The New York Times reported.

After years of research, Kimble revealed that the original photograph that inspired the poster was a picture of Fraley and not Doyle, who worked as a metal presser in a Michigan plant.

Doyle made the claim based on a photograph in a 1942 newspaper of a woman in a polka-dotted bandanna. Doyle later saw a reprint of the photo in a Modern Maturity magazine in 1984, thinking the picture resembled herself, The New York Times reported. Ten years after that, she saw the “We Can Do It Poster” and believed that woman resembled the woman in the photograph in the newspaper. Therefore, she thought the image also resembled her.

Doyle was later recognized in the media as the woman who inspired the poster until Kimble’s research found that Fraley was the woman they were looking for.

Kimble found a captioned copy of the photograph in the newspaper of Fraley along with the location, Alameda, California.

Kimble published an article in the journal Rhetoric & Public Affairs, “Rosie’s Secret Identity,” debunking Doyle’s claim after visiting with Fraley at her home and seeing her newspaper clipping.

“She was just so excited and thrilled that someone was there to listen to her story,” Kimble said, according to the BBC. “By that point it was three or four years she had been aware that her photo was out there under someone else’s name. No matter how hard she tried, no one would listen to her.”

While there is no direct evidence to say that the “We Can Do It” poster was inspired by Fraley, there are uncanny connections.

The picture was published the year before Miller made the poster and it was published in his hometown of Pittsburgh. Fraley’s outfit is also very similar to the outfit worn by the woman in the poster.

It is clear that the woman in the newspaper photograph was Naomi Parker Fraley.