A 10-year Army veteran who served two tours in Afghanistan has offered to take Rep. Maxine Waters’ seat at this month’s State of the Union Address, after Waters announced that she would not be attending.

Waters, a Democrat from California, is one of several lawmakers who announced they would not be attending the President’s State of the Union Address on Jan. 30 due to Trump’s alleged remarks on Haiti, El Salvador and African nations.

“Why would I take my time to go and sit and listen to a liar,” Waters said on MSNBC. “Someone who lies in the face of facts, someone who can change their tune day in and day out. What does he have to say that I would be interested in?”

“Everyone please help and retweet. I would like to take Maxine Waters seats at The State Of The Union Address. If they don’t want to go this Military Veteran would gladly go. I’d tell the President how much he means to myself, family, Military, and all of his supporters,” Taylor tweeted, tagging Fox News. 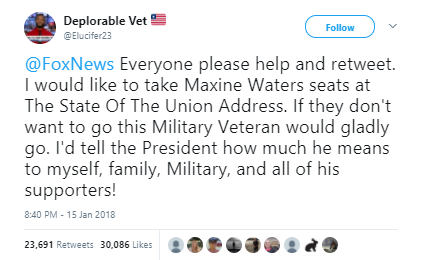 Taylor’s tweet was featured on Fox and Friends. Taylor said he used the Twitter handle “Deplorable Vet” due to his support for Trump and in defiance of Hillary Clinton’s previous “basket of deplorables” remark.

“You can call us what you want, but we’re still going to support our president,” Taylor said.