A Florida Vietnam veteran who received more than half a million dollars in disability pay for blindness has been sentenced for claiming false disability from the Department of Veterans Affairs (VA), The Bradenton Herald reported.

Doyle Mullins, 71, claimed disability from the VA for more than 20 years, saying that he was “totally and permanently blind,” according to court documents. 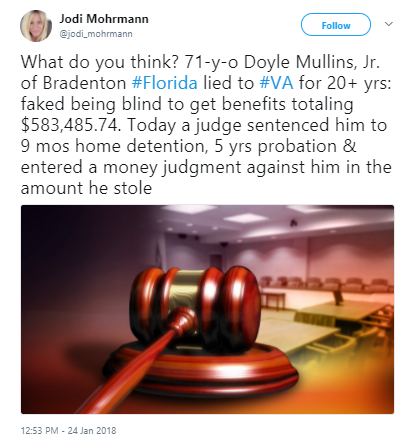 According to The Bradenton Herald, Mullins pleaded guilty to theft of government funds last October.

Investigators said they watched Mullins engage in activities such as mowing his lawn, running errands and driving, according to The Herald.

Mullins was paid thousands of dollars every month in medical benefits for his wife and grants for adaptive housing and a car.

“I have vets fighting deadly diseases they got in the military fighting to live and take care of family. Seeing someone take advantage of that, it’s disgusting,” Manatee County Veterans Services Counselor Renee Medina told Fox 13.