A video of Iranian protestors dragging what appear to be dead or injured bodies of fellow protestors off the streets has emerged, as Iran entered its sixth day of protests in a country that is increasingly growing in unrest that is expected only to fester, as larger-scale protests are possibly being planned for Friday.

This is the country’s biggest political uprising since 2009, and the death toll has already climbed to at least 20 people. Hundreds of people have been arrested, including at least 400 people arrested in the capital, Tehran.

Armin Navabi on Monday posted a video to Twitter that appears to show protestors begging for help as they drag limp bodies – either dead or injured protestors – to safety. The protestors are being shot at by the Islamic Revolutionary Guard Corps, a branch of Iran’s Armed Forces that President Donald Trump has called a “corrupt personal terror force.”

Islamic Revolutionary Guard opened fire at protesters in Iran. A man yells: “Come help us!” as they drag the dead bodies of their fellow protesters. #IranProtests pic.twitter.com/A0hNluaZ2Q

And another video, also posted by Navabi, shows a member of the Islamic Revolutionary Guard Corps warning protestors to stop rebelling because “it’s dangerous.”

“We are coming to stop the [Western] protests. Stop rebelling… it’s dangerous [for you],” he says, according to the translation.

Islamic Revolutionary Guard militia member warns the protesters: “We are coming to stop the Westen protests. Stop rebelling… it’s dangerous [for you].”
The government accuses protesters of being foreign agents which is why he considers the protests to be Western.#IranProtests pic.twitter.com/ahQDpsR49j

The Iranian government considers protestors to be foreign agents, hence why the protests themselves are considered Western in nature. The protests began on Thursday in one city in eastern Iran over extreme price increases of everyday grocery items, and they have since turned into a nationwide movement that is beginning to call for a regime change. Grave violence has broken out, and at least 20 are now dead as the protests continue to spread across Iran.

Since the protests began last week, the Iranian government has cut off some of the internet to its people, including the most popular communication app in the country, Telegram, and others such as Instagram. It is estimated that half the country uses the messaging app Telegram.

Many people are finding ways around the partial blackout.

On Sunday, Iranian President Hassan Rouhani noted the people’s right to peacefully protest but warned that security forces would not tolerate vandalism and chaos.

“According to the constitution, and based on basic and citizens’ rights, the people are completely free to make criticism and even protest,” Rouhani said. “The government, however, will most certainly not tolerate the action of any group that wants to vandalize public property or disrupt public order and create social disorder.”

President Trump and the White House have come out in support of the protestors, and they have criticized the Iranian government for sponsoring terrorist groups around the Middle East. Trump also warned that he and the United States are watching for human rights violations.

“The people of Iran are finally acting against the brutal and corrupt Iranian regime,” Trump tweeted on Tuesday morning. “All of the money that President Obama so foolishly gave them went into terrorism and into their ‘pockets.’ The people have little food, big inflation and no human rights. The U.S. is watching!” 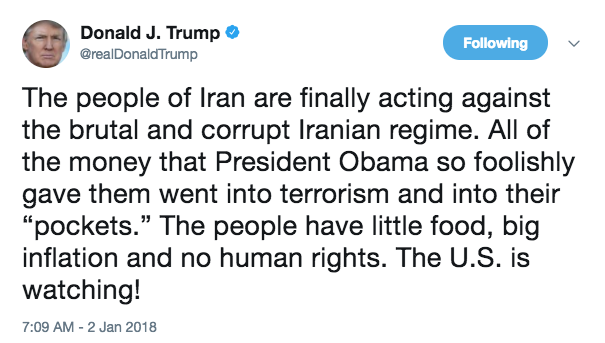 In the thread, he says President Rouhani said in December that there are government funds for “various things,” and that “no one knows who’s in charge.”

.@HassanRouhani in December on the country’s budget: “Everyone has allocated a budget for himself in these past years. There were two brothers in some organization who managed to receive two budgets. Then their cousin joined and he got money for four projects. —-> pic.twitter.com/OskZr9L9k2

“There was a long list of 17 different organizations which only took money from the government,” Rouhani said. “We would give them money at the start of the year and when payment was delayed for a day, they would complain about why the government was late.”

“When we asked where the money was spent, they would say: ‘It’s none of your business. You gave us the money. Goodbye! We will spend it anywhere we want,'” he added.

During his speech last year at the United Nations General Assembly, Trump accused Iran of funding terrorists and creating a dangerous missile arsenal. The Iranian President later came out and said flatly that Iran wants to strengthen its missile capabilities – and doesn’t intend to ask permission to do it.

The Iranian nuclear deal was drawn up in 2015 with Iran, the U.S. and five other nations under former President Barack Obama. Its framework includes stipulations that Iran would redesign, convert and reduce its number of nuclear facilities in order to lift nuclear-related economical sanctions, which would reportedly free up billions of dollars in oil revenue and frozen assets for Iran. The U.S. and Iran also agreed to their own terms, along with terms penned with other nations.

President Trump announced in October that the U.S. would not be certifying the nuclear deal this year, and it is now up to Congress to address the deal’s “serious flaws” in order to protect the American people from any threats of nuclear weapons.

Trump said if Congress can’t reach a solution, then the Iran nuclear agreement would be “terminated.”

The President has called the deal “one of the worst” and “the most one-sided transaction the United States has ever entered into,” and he has continually called out Iran for its funding of terrorism.

Trump said the “rogue regime” of Iran is only perpetuating terrorism around the world, and is becoming more aggressive in doing so.

The hostile Iranian regime has not lived up to “the spirit of deal,” which Trump called “deeply controversial.”

“The Iranian dictatorship […] remains the world’s leading state sponsor of terrorism,” the President said, saying the regime provides assistance to al-Qaida, the Taliban, Hezbollah, Hamas and other terrorists.

Here is a video showing tens of thousands marching in the city of Rasht on Sunday:

The protests started Thursday in Iran’s second largest city, Mashhad, which is one of Iran’s holiest places, due to the country’s economic policies, high inflation, unemployment and economic inequality. The protests then spread to more cities and the message turned more toward regime change.

These are the biggest waves of protests since the nationwide protests in 2009 that the world watched through Twitter.

The protests have also now formed in Tehran, the capital, and are gaining strength there.

Many police vehicles were being burned as the violence increased across the country. A Buzzfeed reporter in the region tweeted: “Youth torch police motorcycle in ‘conservative’ Mashhad. No matter how much Iran regime spends to indoctrinate youth, each generation gets more radical: 2017 more than 2009, more than 1999. They hate you, Khamenei. They really, really hate you.”

Youth torch police motorcycle in “conservative” Mashhad. No matter how much Iran regime spends to indoctrinate youth, each generation gets more radical: 2017 more than 2009, more than 1999. They hate you, Khamenei. They really, really hate you. pic.twitter.com/XWpKaYOKJf

These videos are just a small sampling of what is coming out of the country.