A Vermon man denied attempting to murder a Meals on Wheels volunteer after he attacked her with a machete on Friday, according to police, the Burlington Free Press reported.

Abukar Ibrahim, 32, pleaded not guilty to charges of attempted first-degree murder, violating conditions of release and two misdemeanor counts of unlawful mischief. He is being held without bail. 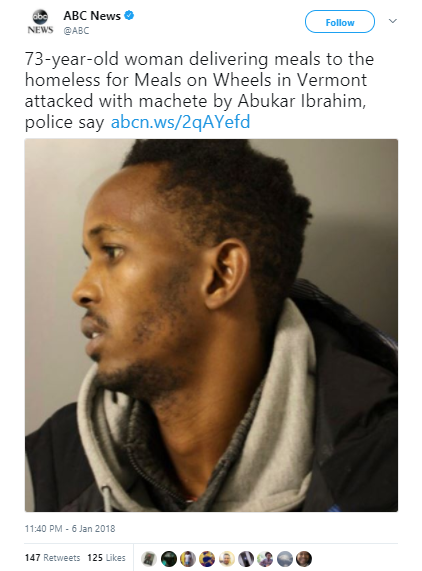 Ibrahim is accused of attacking a 73-year-old Meals on Wheels volunteer who was dropping off hot meals at Harbor Place in Vermont, a motel that provides temporary housing for homeless people.

Police said the volunteer, Johanne LaGrange, suffered a number of injuries, including one to the leg that required stitches, after she confronted Ibrahim for damaging her car.

“He hit me with what I thought was the back edge of the weapon on my back left shoulder a few times then he swiped … the blade across the calf of my right leg,” LaGrange said in a written statement.

“The suspect walked up to my vehicle asking me to open my window,” Siegel wrote in a statement. “I opened my window and he asked me ‘Are you scared?’ and other words that I could not understand.”

Ibrahim then tried to break Siegel’s windshield with a machete before smashing in his back window and going to LaGrange’s car.

Ibrahim then barricaded himself inside a room for more than two hours as police tried to get to him.

According to an affidavit written by Shelburne Police Officer Joshua Flore, Ibrahim threatened to cut the throats of police officers. Ibrahim eventually surrendered.