The Department of Veterans Affairs (VA) secretary has apologized after an Army veteran said he is suing the department after a surgeon four years ago left a scalpel inside his abdomen, causing severe pain and requiring a surgery to remove it.

“It’s an event that should never happen, and I am deeply sorry that any veteran should have to undergo this,” VA Secretary David Shulkin said Wednesday, also saying the error was “inadvertent on the surgeon’s part,” according to WLWT5.

Shulkin was answering a question from Democratic Sen. Richard Blumenthal at a Senate Veterans Affairs Committee hearing, according to the report.

“While this is an extremely rare event – it happens in the country 1,500 times a year, in the VA, it does happen, it happened 12 times in the VA – that’s a rate in the VA much less than what happens outside the VA,” Shulkin also pointed out, WLWT5 reported. “That’s no excuse, this should never happen.” 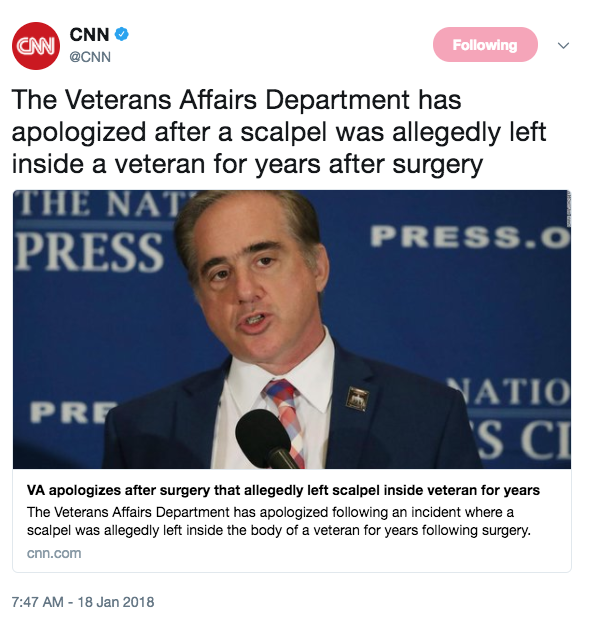 The VA has apologized for allegedly leaving a scalpel inside a veteran for four years. (Twitter)

Glenford Turner, 61, experienced what was described as “severe abdominal pain” for four years after a surgery at the West Haven VA Hospital in Connecticut.

Turner’s surgery was in 2013. When he returned four years later, after experiencing dizziness and abdominal pain, an X-Ray revealed that there was a scalpel inside his abdomen.

“The MRI was stopped when Turner started having severe abdominal pain,” a local Fox affiliate reported. “Attorneys said that X-Rays showed an abandoned scalpel inside Turner’s body. Turner’s lawyers said doctors confirmed it was the scalpel knife used during Turner’s radical prostatectomy, which had been performed four years earlier at the West Haven VA in August, 2013.”

Turner needed surgery to remove the scalpel, and his lawyer, Joel Faxon, said doctors determined it was the same scalpel that had been used during surgery four years earlier.

Turner filed a lawsuit against the VA in U.S. District Court last week. The lawsuit says Turner’s surgery to remove the scalpel was in April 2017.

His lawyer called the act “an incomprehensible level of incompetence.”

“Mr. Turner served our country proudly for decades. It is shocking that in return for that service the VA thanked him by deploying a rookie surgical trainee to perform the surgery who showed an incomprehensible level of incompetence by losing the scalpel in Mr. Turner’s abdomen and not bothering to find it. He just sewed him up and moved on to his next victim,” Faxon said in a press release.