US to send first aircraft carrier to Vietnam in 43 years, Mattis says

The U.S. Navy is planning to send the first aircraft carrier to Vietnam since the end of the Vietnam War in 1975, Secretary of Defense Jim Mattis said Thursday during a visit to Hanoi, Reuters reported.

The planned visit to Vietnam was focused on concerns over China, which sees the U.S. military presence in the region as a threat. Tensions are high between China and the U.S. military due to China’s disputable territorial claims in the South China Sea and aggressive island-building activity. 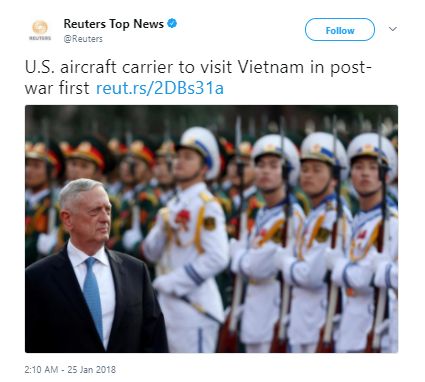 The aircraft carrier visit would be in March at the central port of Danang, making it the first time a U.S. aircraft carrier has been in Vietnam in more than 40 years, according to a Vietnam Defense Ministry statement.

Mattis and Defense Minister Ngo Xuan Lich discussed the aircraft carrier visit in a closed-door meeting. Approval for the visit would still have to be given by higher authorities in the Vietnamese government before the visit occurs.

“We expect it will be approved,” Capt. Jeff Davis said.

The relationship between the two countries have improved over the last four decades. Several smaller Navy ships have visited Vietnam since the end of the 20-year war.

Vietnam also has keen economic interests in the South China Sea, where China makes territorial claims. As a result, Vietnam has expressed its opposition to China’s claims.

“(Vietnam) does have one of the region’s fastest growing economies, and so freedom of navigation and access in the South China Sea will be critical to them economically and of course in their security efforts,” Mattis said earlier this week, according to Reuters.

“We recognize that relationships never stay the same. They either get stronger or they get weaker, and America wants a stronger relationship with a stronger Vietnam,” Mattis told Ngo Xuan Lich.

Mattis’ visit comes just days before the 50th anniversary of the Tet Offensive, a campaign of surprise attacks by North Vietnamese and Viet Cong forces on South Vietnam, dashing the United States’ hopes of a quick victory.