US service member wounded after ‘insider attack’ in Afghanistan

The U.S. Military is investigating the possibility of an insider attack in Afghanistan, when one U.S. service member was wounded during an “active ground engagement,” Reuters reported.

The New York Times reported that the engagement was “described as an insider attack by friendly forces.” And, that U.S. troops then bombed members of the Afghan militia “after at least one opened fire on American Special Forces soldiers deployed there,” The Times said.

“While some Afghan officials said that at least two American soldiers were killed in what was described as an insider attack by friendly forces, Capt. Tom Gresback, a spokesman for the United States military in Afghanistan, rejected those reports and said that only one American service member had been wounded,” The Times reported. “Captain Gresback would not say whether the service member had been wounded by friendly fire, or whether the United States had bombed the militia afterward.”

Capt. Tom Gresback, a public affairs director at the NATO-led Resolute Support headquarters in Kabul, said that one U.S. service member was wounded in the Achin district in Nangarhar province.

“No coalition service members were killed in the engagement. One U.S. service member was wounded and is in stable condition at a medical treatment facility,” Gresback told Voice of America. 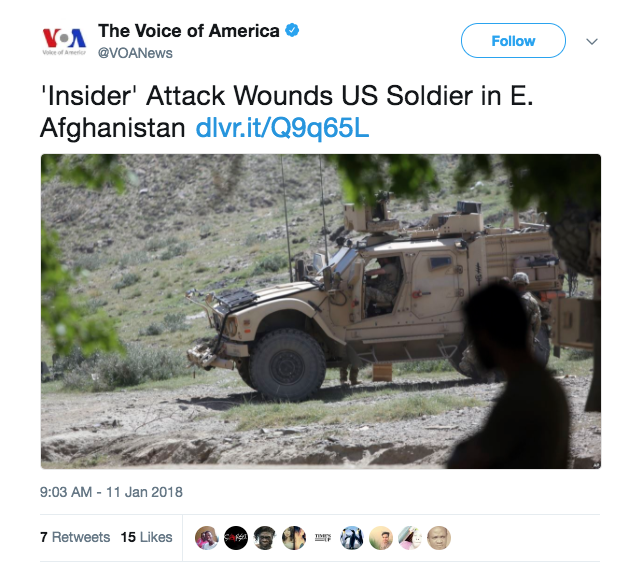 Local media said that after the incident, the U.S. military called in airstrikes, killing more than a dozen members of the militia force.

“We continue to strategically push IS-K [Islamic State Khurasan] back from their fighting positions, taking seven kilometers and clearing much of the Mohmand Valley, Nangarhar,” Gresback said in a statement.

U.S. Special Forces have been combatting IS-K in Nangarhar for the past several years since they appeared in Afghanistan.