US marshal killed in Harrisburg shooting was an Army veteran

The U.S. Marshals Service identified the deputy marshal who was killed Thursday while serving an arrest warrant in Harrisburg, Pennsylvania, Penn Live reported.

The marshal killed was identified as 45-year-old Christopher David Hill, a U.S. Army veteran who served from 1993 to 1996.

“We are all extremely saddened by the tragic death of our brother, Deputy U.S. Marshal Christopher Hill, this morning in Harrisburg, Pennsylvania. He was a devoted public servant who dedicated his life to making his community and this nation safer. We will never forget his commitment and courage,” said David Anderson, Acting Deputy Director of the U.S. Marshals Service. “The nation lost a hero today.”

While Pierce was being handcuffed, Kevin Sturgis, 31, opened fire on law enforcement and struck Hill and York City Police Officer Kyle Pitts. Hill was pronounced dead 20 minutes later while Pitts was taken to a nearby hospital.

Sturgis was killed by return fire. Sturgis was wanted for illegal firearm possession and failing to appear for a probation violation hearing.

“Praying for the officers involved and their families. I am in constant contact with law enforcement, and grateful for their swift action,” Pennsylvania Gov. Tom Wolf tweeted. 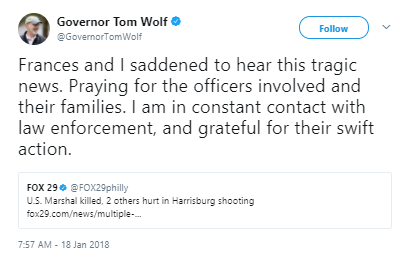 “No words can adequately express the sadness we feel at this moment as we contemplate the loss of yet another law enforcement officer in the line of duty,” Harrisburg Mayor Eric Papenfuse said. “I extend my sincerest condolences to the family of the slain U.S. Marshal, to his colleagues and to all law enforcement officers who risk their lives each day to protect and to serve our city and our nation.”

Hill was an 11-year veteran of the U.S. Marshals Service. In 2008, Hill transferred to Harrisburg.