The U.S.-led Coalition fighting ISIS in Iraq and Syria has killed about 150 ISIS fighters with precision airstrikes near Shafah, Syria, on Jan. 20, Operation Inherent Resolve officials said, according to a Defense Department press release.

“The precision strikes were a culmination of extensive intelligence preparation to confirm an ISIS headquarters and command-and-control center in an exclusively ISIS-occupied location in the contested Middle Euphrates River Valley,” officials said. 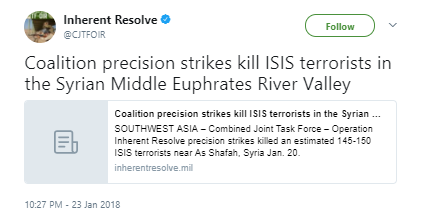 There was a large concentration of ISIS fighters “massing for movement” at the headquarters, according to officials.

Syrian Democratic Forces (SDF) “assisted in target observation prior to the strikes,” according to officials. “The combination of intelligence and continuous eyes on the target ensured no accidental engagement of nonmilitary personnel.”

“Our SDF partners are still making daily progress and sacrifices, and together we are still finding, targeting and killing ISIS terrorists intent on keeping their extremist hold on the region. We cannot take our focus off our mission, and we must not lose our momentum in taking these terrorists off the battlefield and preventing them from resurfacing somewhere else,” Jarrard said.

ISIS has lost more than 98 percent of its territory, but continues to amass large numbers of members to fight in Syria.