There are many new weapons and gear on the way that the U.S. Army will be using in 2018, according to the National Interest. Some of these include new guns, uniforms and boots.

The Army will be putting to use 1,111 M3E1 recoilless rifles, which will be a lighter replacement for the 84mm M3 Multi-Role Anti-Armor Anti-Personnel Weapon System (MMAAWS). The MMAAWS is also known as the M3 Carl Gustaf. 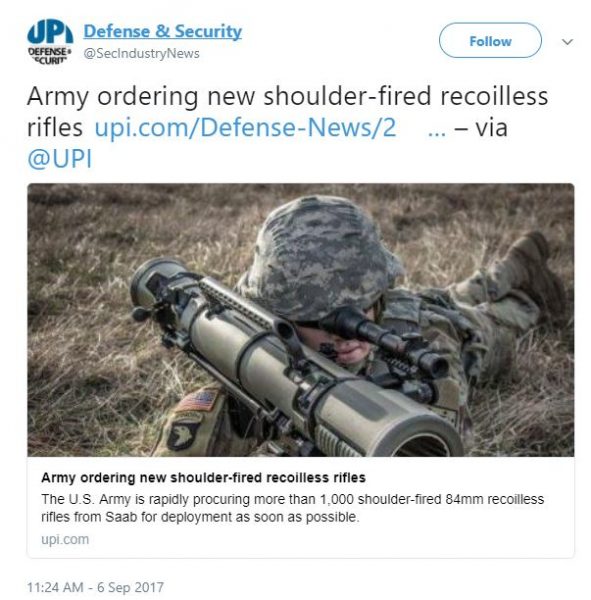 Randy Everett, a Foreign Comparative Testing manager, told the U.S. Army: “The current system that the Army uses is the AT4, which only allows Soldiers to fire one shot, and then they have to throw the system away. With the M3E1, Soldiers can use different types of ammunition, which gives them an increased capability on the battlefield.”

In October 2017, the Army announced that it was working on a new hot-weather Army Combat Uniform.

Task and Purpose reported that the new lightweight uniforms will feature a “breathable, quick-drying tunic perfect for the oppressive humidity.”

When describing the new uniforms, Brig. Gen. Brian Cummings, Program Executive Officer (PEO) Soldier, said in the Army release: “We’ve tested the heck out of these,” and that the uniforms are “based on an existing uniform that has already been extensively tested, getting this lightweight uniform to the field will take less time.”

In December 2016, the Army ordered more than 36,000 pairs of boots from Belleville Boot Company and Rocky Boots, according to Task and Purpose.

The new boots, which will roll out in January of this year, will feature the new jungle pattern that the branch released last year. Constructed out of polyurethane, the boots will feature a low heel, which will prevent snagging.

The boots are also intended to prevent trench foot, as they will feature liners that are designed to quickly dry and have water-draining inserts. Finally, the tread pattern on the boots will more effectively shed mud, there will be better shock-absorbing materials, and the boots will easily fit without having to be worn over time to be broken in.

In a press event about the Army’s new gear, Lt. Col. John Bryan, product manager for Soldier Clothing and Individual Equipment at Fort Belvoir in Virginia, said: “This is important to the Army.”

“It’s important to soldiers in a hot, high-humidity, high moisture area, and we are responding as quickly as we possibly can with the best available, immediate capability we can get on soldiers feet quickly and then refine and improve as we go,” he added.