The U.S. Air Force has deployed three B-2 stealth bombers and 200 Airmen to Guam to support Pacific Command’s Bomber and Assurance Deterrence mission, according to a Pacific Air Forces statement. 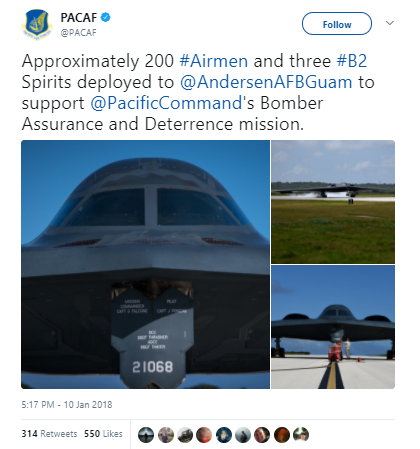 The deployment comes amid discussions between North and South Korea involving the Winter Olympics. According to the Air Force, the deployment was scheduled, but still comes at a time of heightened tensions between the countries.

The B-2 nuclear-capable bombers and the 200 Airmen were deployed to Anderson Air Force Base as part of the Pentagon’s Bomber Assurance and Deterrence mission. For the past 15 years, the Pentagon has sent bombers into the Pacific as a show of support in the region.

The move comes just days after North and South Korean leaders met to discuss the 2018 Winter Olympics next month.

North Korea agreed to send a delegation to the Winter Olympics, but still said they would not discuss denuclearization.

President Donald Trump has also told South Korean President Moon Jae-in that the U.S. would be open to talks with North Korea “at the appropriate time, under the right circumstances,” the White House said Wednesday, Reuters reported.

Mattis apologizes to Japan over string of aircraft mishaps on Okinawa