President Donald Trump said Russia is supplying North Korea and helping the country get around international sanctions that were put in place to restrict North Korea’s nuclear and ballistic missile programs.

“Russia is not helping us at all with North Korea,” Trump told Reuters during an Oval Office interview. “What China is helping us with, Russia is denting. In other words, Russia is making up for some of what China is doing.” 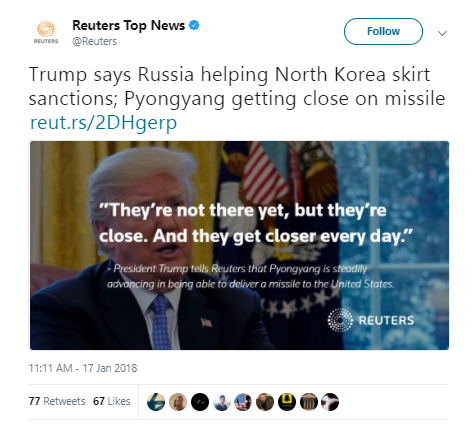 Trump’s praise of China comes at the same time the country has restricted oil and coal supplies to North Korea, while there are reports that Russia supplied oil to North Korea in violation of United Nations sanctions, Reuters exclusively reported.

Last year, China and Russia voted for the U.N. sanctions that were aimed at curbing North Korea’s nuclear and ballistic missile programs.

In November, North Korea had tested its latest intercontinental ballistic missile (ICBM). It was speculated that the ICBM could be capable of striking anywhere in the United States.

The sanctions seek to bar 90 percent of refined oil exports to North Korea by capping the country at 500,000 barrels a year and limiting crude oil exports at 4 million barrels annually.

During the interview with Reuters, Trump said he is willing to sit down with Kim Jong Un, but is unsure if sitting down with him will provide a solution.

“I’d sit down, but I‘m not sure that sitting down will solve the problem,” Trump said.

“They’ve talked for 25 years and they’ve taken advantage of our presidents, of our previous presidents,” he said.

Trump expressed concerns for North Korea’s nuclear program and North Korea’s claims that they could strike the United States with a ballistic missile.

“They’re not there yet, but they’re close. And they get closer every day,” he said.