The head of Naval Surface Forces Pacific will resign from his position later this week following two collisions in the Pacific involving the USS John S. McCain and USS Fitzgerald that claimed the lives of 17 sailors combined, defense officials recently told Defense News.

Vice Adm. Tom Rowden will step down from his position at Naval Surface Force Pacific following a recommendation from Adm. James Caldwell that he be relieved.

Rowden was expected to retire Feb. 2, but with him stepping down, Rear Adm. Richard Brown will take his place.

Caldwell was appointed Consolidated Disposition Authority for disciplinary action regarding the McCain and Fitzgerald collisions.

Caldwell was to “provide a fresh, independent perspective. The complexity, scope and the tragic consequences of these collisions warrant that the Navy exercise due diligence to ensure that the Navy acts fairly and appropriately,” according to a Navy statement given to USNI News. “Appointing a CDA ensures that the process will be thorough, fair, impartial and efficient.” 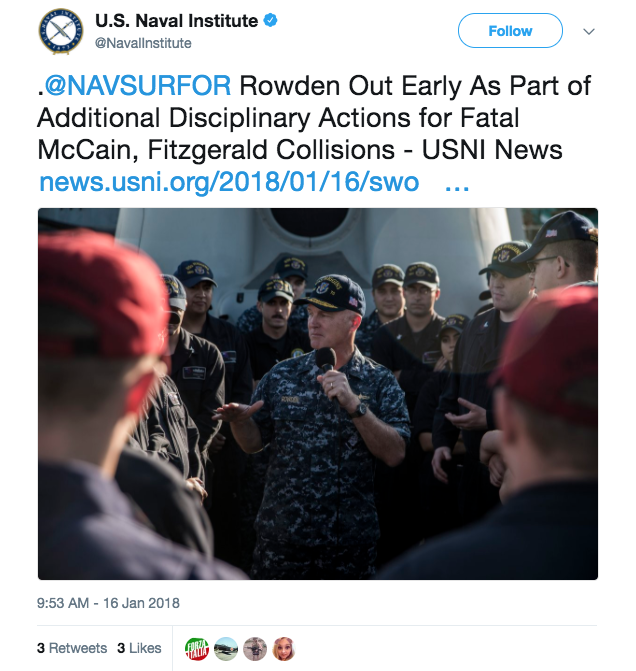 Caldwell provided his recommendation to senior Navy leadership, including Chief of Naval Operations (CNO) Adm. John Richardson, over the weekend. His findings called for disciplinary action, according to USNI News.

Commanding officers and senior leadership on the USS John S. McCain and USS Fitzgerald were relived following the collisions.

Richardson and  Secretary of the Navy Richard Spencer are scheduled to appear in front of the House Armed Services Seapower and Projection Forces Subcommittee to testify on the reviews of the McCain and Fitzgerald collisions, USNI News reported.

In November, the U.S. Navy released an official report after its investigation into the fatal destroyer collisions, and it has found that the accidents were primarily due to the crews’ complacency, over-confidence and lack of procedural compliance.

“Both of these accidents were preventable and the respective investigations found multiple failures by watch standers that contributed to the incidents,” Richardson said in a press release at the time. “We must do better.”

The Navy also issued specific comments regarding each collision:

The collision between Fitzgerald and Crystal was avoidable and resulted from an accumulation of smaller errors over time, ultimately resulting in a lack of adherence to sound navigational practices. Specifically, Fitzgerald’s watch teams disregarded established norms of basic contact management and, more importantly, leadership failed to adhere to well-established protocols put in place to prevent collisions. In addition, the ship’s triad was absent during an evolution where their experience, guidance and example would have greatly benefited the ship.

The collision between John S. McCain and Alnic MC was also avoidable and resulted primarily from complacency, over-confidence and lack of procedural compliance. A major contributing factor to the collision was sub-standard level of knowledge regarding the operation of the ship control console. In particular, McCain’s commanding officer disregarded recommendations from his executive officer, navigator and senior watch officer to set sea and anchor watch teams in a timely fashion to ensure the safe and effective operation of the ship. With regard to procedures, no one on the Bridge watch team, to include the commanding officer and executive officer, were properly trained on how to correctly operate the ship control console during a steering casualty.