Bell Helicopter is close to finishing the development of the V-280 Valor, which might be the U.S. Army’s first tiltrotor aircraft in more than three decades, according to Popular Mechanics.

Since the early 1980s, the Army has used the UH-60 Black Hawk, but the branch has recently been considering other options, as aviation technology has evolved. Bell’s V-280 Valor has incorporated many of the vertical flight innovations that have been developed over the last several decades. 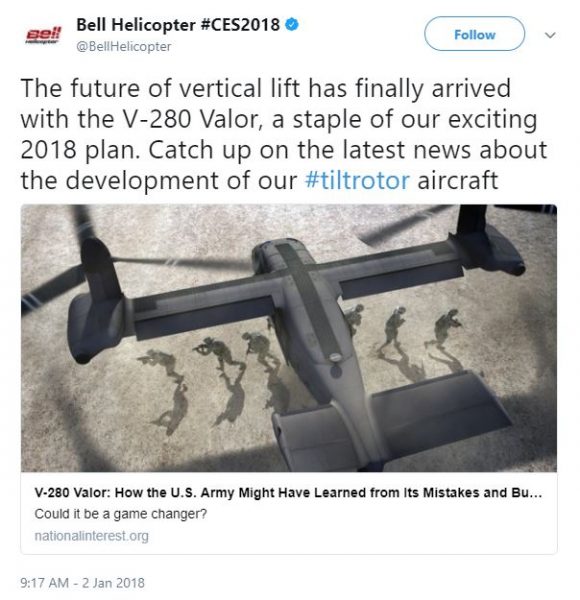 Last December, the V-280 Valor hit a major milestone, as it took its first un-tethered flight. The flight took place after its first tethered flight, which was several months ago, according to New Atlas.

Mitch Snyder, the President and CEO of Bell Helicopter, said in a statement: “This is an exciting time for Bell Helicopter, and I could not be more proud of the progress we have made with first flight of the Bell V-280.”

“First flight demonstrates our commitment to supporting Department of Defense leadership’s modernization priorities and acquisition reform initiatives. The Valor is designed to revolutionize vertical lift for the U.S. Army and represents a transformational aircraft for all the challenging missions our armed forces are asked to undertake,” Snyder added.

The V-280 Valor is inspired by Bell’s V-22 Osprey, but is simpler, lighter and less expensive. The aircraft features a 30-percent improvement in weight, which is due to its widespread use of composites in honeycomb sandwich configurations. The V-280 uses the composite materials in its wings, fuselage and tail section.

When asked by Popular Mechanics to explain the Valor’s improvements over the UH-60, Vince Tobin, the Vice President for Bell’s Advanced Tiltrotor Systems, said: “It carries the same payload twice as fast and has twice the range,” and: “If you put the same payload on a Black Hawk, you must stop at half the distance, and while the Black Hawk was stopping for fuel, the V-280 would be landing at its destination.”

Bell designed the V-280 Valor to feature the same level of durability as the Black Hawk.

While the Bell V-280 Valor offers many improvements over the Black Hawk, it will be competing with the Boeing-Sikorsky SB>1 Defiant to serve as its replacement.

According to Popular Mechanics, “the winning aircraft will likely replace not only the UH-60 Black Hawk but also the AH-64 Apache.”

And here is a video of Apaches in flight: