Switzerland denies citizenship to welfare recipients unless they pay it back

Switzerland has banned citizenship bids to individuals who have lived in the country on welfare during the past three years unless they pay back the money that was given to them, according to Austrian newspaper Kronen Zeitung.

A previous law allowed asylum seekers and migrants to apply for citizenship as long as they weren’t on state handouts at the time of their application. 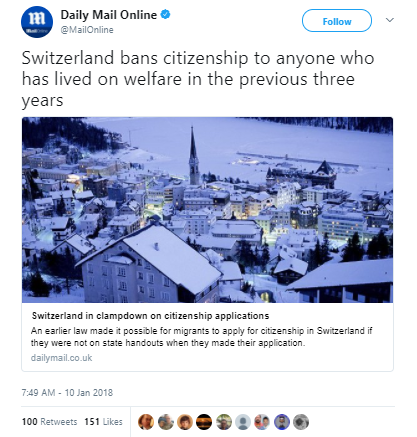 As part of the country’s new Civil Rights Act, which went into effect Jan. 1, applicants need to prove their integration so that their citizenship bids can be successful.

New language requirements have also been implemented to show that applicants have proven language efficiency at a certain level, depending on where they live.

Asylum seekers have tried to come to the country through the southern border near Italy and make their way to other countries, as well.

However, throughout the past several years, Switzerland has vowed to take in people seeking asylum from war-torn countries.