“Allowing Kim Jong Un’s North Korea to participate in [the Winter Olympics] would give legitimacy to the most illegitimate regime on the planet,” Graham, a Republican from South Carolina, wrote on Monday. “I’m confident South Korea will reject this absurd overture and fully believe that if North Korea goes to the Winter Olympics, we do not.” 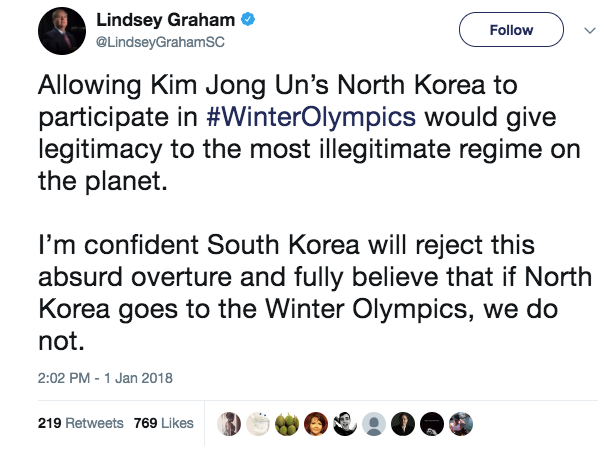 Graham’s comments come at a time when South Korea has offered to hold talks with North Korea next week that would focus on North Korea’s participation in the upcoming Winter Olympics, but would potentially include talks on North Korean decentralization, Reuters reported.

“We look forward to candidly discussing interests from both sides face-to-face with North Korea along with the North’s participation in the Pyeongchang Winter Olympics,” South Korea’s Unification Minister Cho Myong-gyon said.

The offer for talks comes just one day after Kim Jong Un’s New Year’s day address, when he said he was “open to dialogue” with Seoul so North Korean athletes could take part in the Winter Olympics. Kim Jong Un also stressed that U.S. territory “is within the range of our nuclear strike and a nuclear button is always on the desk of my office and this is just a reality, not a threat.”

After Kim Jong Un’s address, South Korean President Moon Jae-in told the government to move as quickly as possible to get North Korea to the Winter Olympics.

“I regret the government had even lost the flexibility to spend one day or two taking a deep breath and meticulously analyzing Kim Jong Un’s ulterior motive before hastily issuing a welcoming statement,” he said. “The government will have to strive more to come up with a countermeasure not to get caught in a trap set by Kim Jong Un.”

North Korea may be trying to cause a rift between the U.S. and South Korea as a way to loosen sanctions against them, according to Tufts University Fletcher School Professor and North Korea expert Sung-Yoon Lee.

Lee told the Boston Herald that the U.S. and its allies “have a less well-developed game plan and no real strategy.”

“It paints Trump further into the corner as the aggressor, even when the crux of the matter is North Korea (has) an illegal nuclear program,” Lee said. “But whenever Kim takes a mini-step back, he’s able to make a U.S. president look like the aggressor.

“One doesn’t need to be a genius to see that this is what North Korea does: After having created a war-like, crisis atmosphere, (Kim) takes a small step back and there’s a collective sigh of relief that there’s no war. It does wonders for North Korea’s image,” he added.