Sen. Jeff Flake slammed President Donald Trump during a speech on the Senate floor Wednesday, comparing the president to Joseph Stalin and calling out Trump for attacks on the press.

“2017 was a year which saw the truth – objective, empirical, evidence-based truth – more battered and abused than any other in the history of our country, at the hands of the most powerful figure in our government,” the Republican Senator from Arizona said during the speech.

“It was a year which saw the White House enshrine ‘alternative facts’ into the American lexicon as justification for what used to be simply called ‘old-fashioned falsehoods.’ It was a year in which an unrelenting daily assault on free speech was launched by the White House,” he continued.

Flake then compared President Trump to Joseph Stalin. “Stalinism,” as it came to be known, included socialist theories and called for a centralized state, as well as the subordination of interests of other Communist parties to those interests of the Communist Party of the Soviet Union.

“‘The enemy of the people,’ was what the President of the United States called the free press in 2017,” Flake said. “It is a testament to the condition of our democracy that our own president uses words infamously spoken by Joseph Stalin to describe his enemies.”

Stalin was dictator of the Soviet Union from the mid-1920s until he died in 1953.

“It bears noting that so fraught with malice was the phrase ‘enemy of the people,’ that even Nikita Khrushchev forbade its use, telling the Soviet Communist Party that the phrase had been introduced by Stalin for the purpose of ‘annihilating such individuals’ who disagreed with the supreme leader,” Flake continued.

Flake said America should be a place where the most powerful people should be questioned the most.

“Here in America, we do not pay obeisance to the powerful – in fact, we question the powerful most ardently – to do so is our birthright and a requirement of our citizenship – and so, we know well that no matter how powerful, no President will ever have dominion over objective reality,” he said.

Sen. Flake: “An American president who cannot take criticism — who must constantly deflect, and distort and distract, who must find someone else to blame — is charting a very dangerous path.” pic.twitter.com/VO6201PSzw

“Any of us who have spent time in public life have endured news coverage we felt was jaded or unfair. But in our positions, to employ even idle threats to use laws or regulations to stifle criticism is corrosive to our democratic institutions. Simply put: it is the press’s obligation to uncover the truth about power. It is the people’s right to criticize their government. And it is our job to take it,” Flake said. 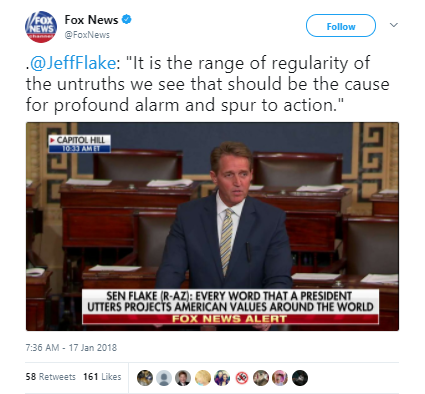 Flake warned of the dangers that despotism presents.

“This alone should be a source of great shame for us in this body, especially for those of us in the President’s party. For they are shameful, repulsive statements. And, of course, the President has it precisely backward – despotism is the enemy of the people,” Flake said.

“The free press is the despot’s enemy, which makes the free press the guardian of democracy. When a figure in power reflexively calls any press that doesn’t suit him ‘fake news,’ it is that person who should be the figure of suspicion, not the press,” he pointed out.

“To be very clear, to call the Russia matter a ‘hoax’ – as the President has many times – is a falsehood. We know that the attacks orchestrated by the Russian government during the election were real and constitute a grave threat to both American sovereignty and to our national security. It is in the interest of every American to get to the bottom of this matter, wherever the investigation leads,” Flake said.

Flake called on his fellow lawmakers to be an ally of truth.

While they share the same political party, Flake has often been critical of Trump.