Russian jet gets within 5 feet of US aircraft then engages for 2 hours, 40 minutes

A Russian jet flew within five feet of a U.S. Navy plane during an unsafe intercept over the Baltic Sea on Monday, according to a Naval Forces Europe news release. 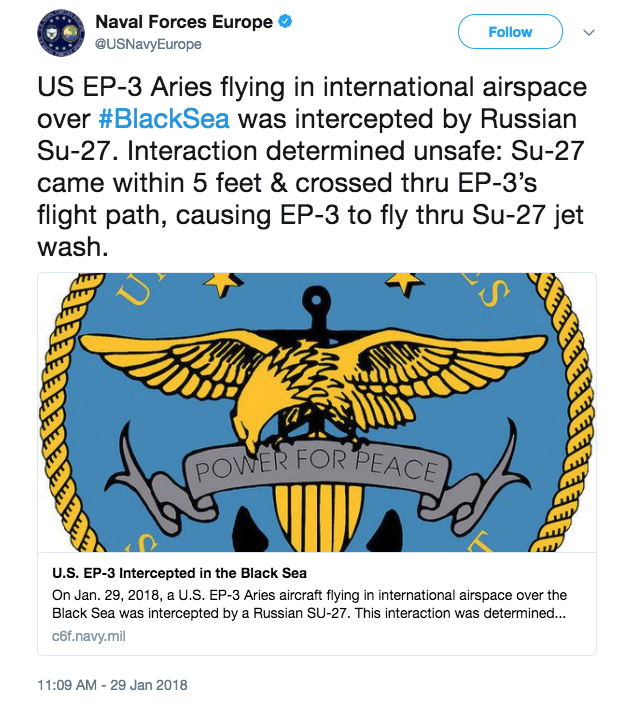 “This interaction was determined to be unsafe due to the SU-27 closing to within five feet and crossing directly through the EP-3’s flight path, causing the EP-3 to fly through the SU-27’s jet wash,” according to Naval Forces Europe.

According to the news release, the U.S. Navy aircraft was operating in accordance with international law.

In December, a pair of U.S. Air Force F-22 Raptors intercepted and fired warning flares at two Russian Su-25 jets, after the Russian jets flew east of the de-confliction line that separates Russian- and U.S.-led coalition operating space over Syria.

The F-22s fired warning flares after the Russian aircraft crossed over the de-confliction line on multiple occasions, nearly causing a mid-air collision. The U.S. used a pre-established de-confliction hotline to diffuse the aircraft intercept.

In November, a Russian Su-30 fighter jet buzzed and provoked a U.S. Navy aircraft while it was flying routinely over the Black Sea.

The Russian jet crossed 50 feet in front of the Navy P-8A Poseidon aircraft while engaging its afterburners, which forced the P-8 to enter its jet wash and caused “violent turbulence.”

The video footage of two intercepts from Nov. 23 and on Dec. 13, 2017, was taken from cameras inside the cockpits of F-15s from the 493rd Expeditionary Fighter Squadron, belonging to the 48th Fighter Wing of RAF Lakenheath, in the United Kingdom.

The video shows two Russian Navy Su-30 Flankers flying in the Baltics before they’re intercepted by American F-15s because they did not broadcast the proper codes required by air traffic control and had no flight plan on file.