Russia has interfered in 19 countries’ elections over 2 decades, report finds

Russia has interfered in the politics, governments and affairs of 19 countries for at least two decades, according to a newly released report by U.S. Senate Democrats.

The report, titled “Putin’s Asymmetric Assault on Democracy in Russia and Europe: Implications for U.S. National Security,” was released Wednesday and is 206 pages long. It was prepared for the Senate Committee on Foreign Relations.

The report states that Russia and its President, Vladimir Putin, have interfered in other countries’ affairs and politics, spreading “misinformation,” and that Russia has also funded “far-right political causes” and manipulated energy supplies “long before 2016,” The New York Times reported, referring to Russia’s interference in the 2016 Presidential election in the United States.

While the report criticizes President Donald Trump, Trump has tweeted many times that there is no collusion between himself and Russia.

On Wednesday morning, Trump tweeted: “The single greatest Witch Hunt in American history continues. There was no collusion, everybody including the Dems knows there was no collusion, and yet on and on it goes. Russia and the world is laughing at the stupidity they are witnessing. Republicans should finally take control!” 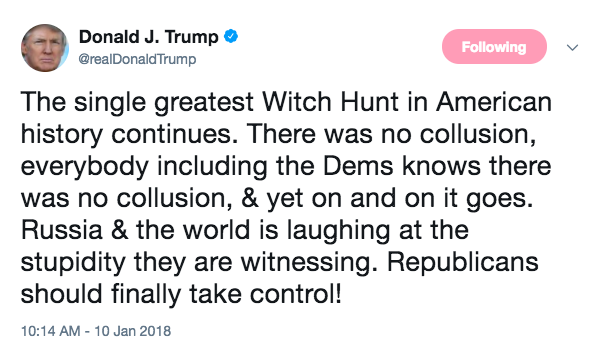 The report calls for Trump to “assert presidential leadership” and respond to the Russian interference, which might include setting up an agency modeled after the National Counterterrorism Center.

According to the report:

“Nearly 20 years ago, Vladimir Putin gained and solidified power by exploiting blackmail, fears of terrorism, and war. Since then, he has combined military adventurism and aggression abroad with propaganda and political repression at home, to persuade a domestic audience that he is restoring Russia to greatness and a respected position on the world stage. All the while, he has empowered the state security services and employed them to consolidate his hold on the levers of political, social, and economic power, which he has used to make himself and a circle of loyalists extraordinarily wealthy.”

The report points out how Russia has used it’s government security services to “harass and even assassinate political enemies,” as well as “cheat at the Olympic Games” and protect Russian cybercriminals who attack U.S. businesses.

Mr. Putin has thus made it a priority of his regime to attack the democracies of Europe and the United States and undermine the transatlantic alliance upon which Europe’s peace and prosperity have depended upon for over 70 years. He has used the security services, the media, public and private companies, organized criminal groups, and social and religious organizations to spread malicious disinformation, interfere in elections, fuel corruption, threaten energy security, and more. At their most extreme, the Russian government’s security services have been used to harass and even assassinate political enemies at home and abroad; cheat at the Olympic Games; and protect and exploit cybercriminals in Russia who attack American businesses and steal the financial information of American consumers. Mr. Putin resorts to the use of these asymmetric tools to achieve his goals because he is operating from a position of weakness—hobbled by a faltering economy, a substandard military, and few followers on the world stage.”

The report also offers at least 30 recommendations that might help the United States protect the American government and democracy from any new Russian threats, and how to work with other European countries to do the same.

The efforts would include “new sanctions to punish states that initiate cyberattacks on elections or critical infrastructure, an international summit meeting centered on such threats, an allied commitment of mutual defense against cyberattacks, as well as forcing social media companies to disclose the sources of funding for political ads,” The New York Times reported.

Members of the U.S. House Intelligence Committee in November released several Kremlin-backed Facebook and Instagram ads that were paid for by Russia.

The ads were released to the public amid the ongoing investigation by the federal government of the Russian hacking and interference of the 2016 Presidential election.

At that time, there was another Congressional hearing where Facebook, Inc., testified that the Russian ads likely made it to the news feeds of about 126 million people over a two-year period – roughly 40 percent of the U.S. population.

The ads were posted by Russian-linked accounts, which were backed by the pro-Kremlin Internet Research Agency.

The ads are now archived online.