A New Jersey police department has deleted a Facebook post that showed a police officer using a hand sign common in a schoolyard game, but that some interpreted as being “racially offensive,” according to NJ.com. 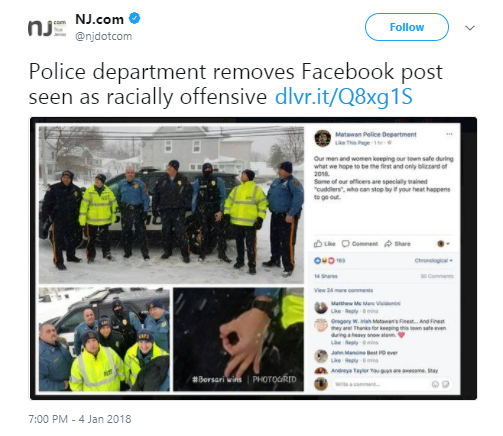 The picture included a caption that said the officers in the pictures are “specially trained ‘cuddlers'” who can help out those who have lost heat.

Police Chief Jason Gallo said that was not the intention of the hand sign, as the picture was intentionally playful.

The hand gesture was in reference to the “circle game,” a schoolyard game where someone who looks at the circular hand sign below the waist “loses” and gets a playful punch in the arm.

“The circle game that kids play in school,” Gallo said about the hand sign in the photo. “Someone tried to say it was something racial. It’s just ridiculous.”

“Unfortunately, something nice turned into us being in the news,” Gallo added. “That’s why a lot of departments are not on social media.”