Navy Secretary Richard Spencer was a topic of back-and-forth conversation after recently released pictures from his special holiday visit to Afghanistan showed him speaking to troops with a pistol holstered on his thigh, according to The San Diego Union-Tribune. 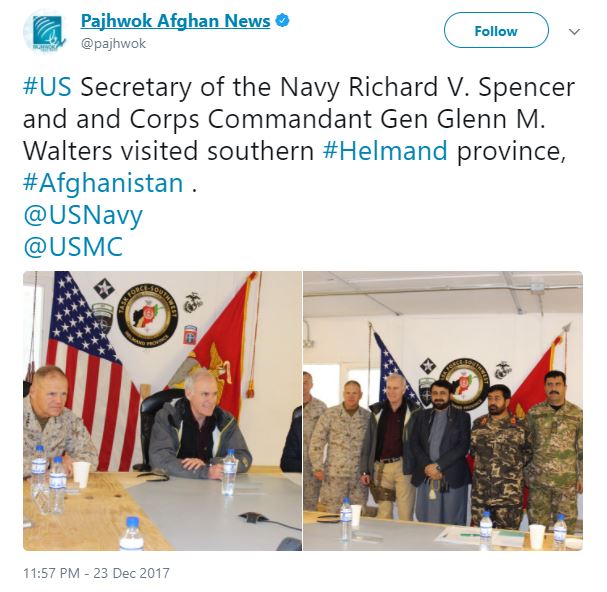 Civilians such as Spencer typically rely on an armed military personnel security detachment (PSD) for protection when in a combat zone. It is likely Spencer has experience handling the pistol, as he is a former H-46 Sea Knight pilot in the U.S. Marine Corps.

Spencer, who is 63, was sworn in on August 3 of last year by President Donald Trump as the 76th Secretary of the Navy. The photos were taken during his holiday visit to Camp Shorab, which was one of several locations he visited in the region.

In response to the pictures, Navy spokesman Capt. Patrick McNally confirmed to the Tribune in an email that Spencer was provided with a handgun, ammunition and a holster by Marine commanders in the Task Force Southwest.

As the images spread over social media, people defended Spencer by pointing out that he was carrying the weapon to protect himself from potential dangers:

“… because he’s in Afghanistan? There’s literally nothing prohibiting you from carrying a firearm because you’re a senior official,” one user said. “General deploy with a firearm. Or carry one on short visits.”

… because he’s in Afghanistan? There’s literally nothing prohibiting you from carrying a firearm because you’re a senior official. Generals deploy with a firearm. Or carry one on short visits.

Another user said: “He’s in a combat zone, and a former Marine, so I don’t see why this is an issue.”

He’s in a combat zone, & a former Marine, so I don’t see why this is an issue, except that he’s a Trump appointee so that makes it polemical.

Better question is will combat operations in Afghanistan ever end?

According to the Tribune, regulations were passed by the military in 2006 that required civilians like Spencer to obtain written authorization to carry weapons. It is unknown if he received the authorization before being given the weapon.

Some people on Twitter felt that Spencer was trying to “showboat” and “show off” in front of the troops:

Spencer may have been trying to impress the Marines pictured, who are not carrying weapons. Their expressions suggest how well he succeeded.

Phillip Carter, the director of the Center for a New American Security’s Military, Veterans and Society research program, told the Tribune: “It’s odd for a senior civilian political appointee to carry a weapon in a combat zone.” He also said: “But if you’re going to carry then you should do so safely, with proper training, including both weapons [qualification] and [rules of engagement] training.”

He also mentioned: “Very few senior officials have formal weapons training, let alone recent marksmanship qualifications or training on military rules of engagement. Senior appointees at that level have a protective detail assigned just so they can focus on their job and not worry about their personal security.”

McNally went into more detail and said: “He was offered the weapon to carry while he was traveling around (Afghanistan) and he accepted that offer.”

“It was not something that he specifically requested and it was offered to everybody on the travel team,” he added.