The Peshawar High Court in Pakistan has ordered the release of an anti-American cleric who was jailed for sending thousands of volunteers to Afghanistan to fight the U.S. troops in 2001.

Sufi Mohammad will be freed and the paperwork for his release has already been processed, defense lawyer Fida Gul recently said.

Mohammad is the founder of Tehreek-e-Nafaz-e-Shariat-e-Mohammadi, a Pakistani militant organization.

In 2009, Mohammad was arrested for encouraging violence and terrorism.

He is also the father-in-law of Mullah Fazlullah, the leader of the Taliban offshoot in Pakistan who is believed to be hiding in Afghanistan.

Mohammad’s release comes during a time of heightened tensions between the U.S. and Pakistan after President Donald Trump’s decision to suspend aid to Pakistan due to alleged inaction taken against the Taliban and Haqqani terrorist militant groups.

In a recent tweet, on New Year’s Day, President Trump said: “The United States has foolishly given Pakistan more than 33 billion dollars in aid over the last 15 years, and they have given us nothing but lies & deceit, thinking of our leaders as fools. They give safe haven to the terrorists we hunt in Afghanistan, with little help. No more!” 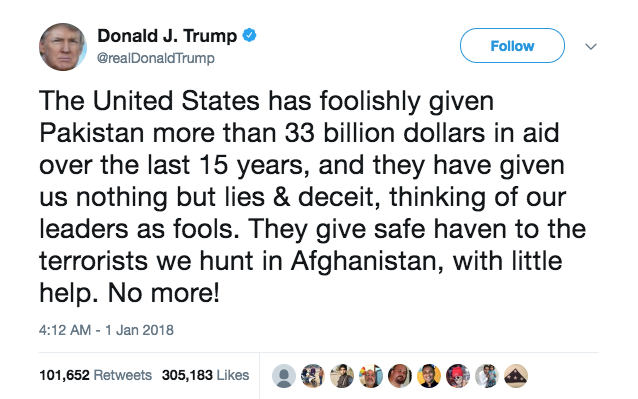 Pakistan’s ambassador to Washington, D.C. – Aizaz Ahmad Chaudhry – denied the accusations that Pakistan is not helping in the efforts to stop terrorism.

“We have been the victim of terrorist attacks and how can we tolerate the presence of militants on our soil,” he said.

Pakistan’s Foreign Ministry said the suspension of aid is “counterproductive.”

“Working toward enduring peace requires mutual respect and trust, along with patience and persistence,” Pakistan said in a statement. “Arbitrary deadlines, unilateral pronouncements and shifting goal posts are counterproductive in addressing common threats.”