North Korea has agreed to send athletes to the Winter Olympics in South Korea, as well as hold military talks, following a historic discussion that took place Tuesday in the “truce village” of Panmunjom in the Korean Demilitarized Zone (DMZ) that separates the two countries.

Delegates from North Korea and South Korea held talks for the first time in two years. 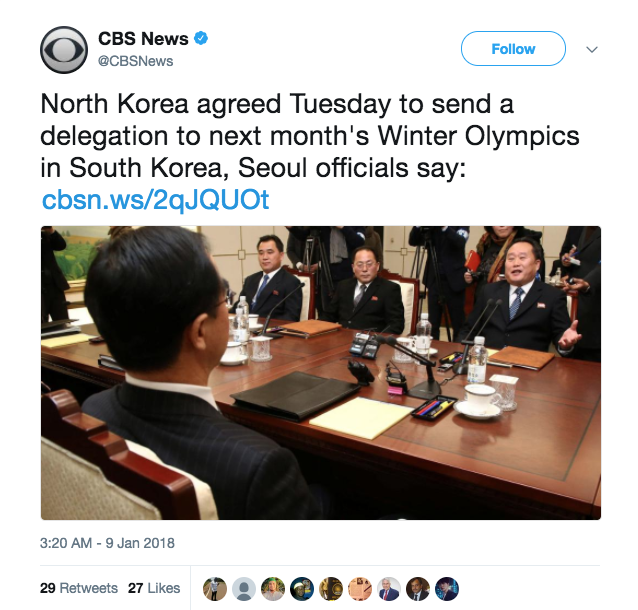 North Korea’s delegation to the Olympics in South Korea would include athletes, a cheering squad, a performance-art troupe, observers, a taekwondo demonstration team and journalists, according to a statement from South Korean Vice Unification Minister Chun Hae-sung, The New York Times reported.

Military talks on Tuesday were held “to ease the current military tensions between the two Koreas.”

“Both sides honor the inter-Korean declarations and have agreed to solve all issues between the Koreas through conversation and negotiations,” a joint statement between both countries said. “To achieve this, the both sides have agreed to hold high-level talks and other talks in different sectors.”

“We expressed the need to promptly resume dialogue for peace settlement, including denuclearization, and based on the mutual respect (the two Koreas) cooperate and stop activities that would raise tensions on the Korean Peninsula,” Hae-sung said, according to CNN.

The South proposed reunifications for families separated during the Korean War in time for lunar New Year’s Day on Feb. 16, a tradition where families reunite in Korea.

Gwon also expressed discontent over the discussion of denuclearization during military talks.

Just last week, North Korea reopened a once dormant telephone hotline that links directly to South Korea, and the two countries spoke for 20 minutes, this in advance of the North-South Korean meeting that took place. Both North Korea and South Korea planned to re-open a second military hotline on the Korean peninsula.

During a telephone conversation between Trump and Jae-in, the South Korean leader made the request to delay the drills.

“I believe it would greatly help ensure the success of the PyeongChang Winter Olympic Games if you could express an intention to delay joint South Korea-U.S. military exercises during the Olympics in case the North does not make any more provocations,” Moon was quoted as telling Trump, Yonhap News Agency reported.

Trump and Moon agreed to “de-conflict the Olympics and our military exercises so that United States and Republic of Korea forces can focus on ensuring the security of the Games,” the White House confirmed in a press release, Yonhap reported.

During the telephone call, Trump said he “hoped inter-Korean talks would lead to good results and that he would send a high-level delegation including members of his family to the Winter Olympics,” Reuters had reported.

Joe Arpaio will run for Arizona Senate 'to support Trump'