Marking the 50th anniversary the USS Pueblo was captured by North Korea, the country led by dictator Kim Jong Un put the ship on display as a symbol of success against the U.S. military.

The ship has become a propaganda symbol of North Korea’s alleged “success” and continued fight against the U.S. military. The ship sits in the Pothong River as part of  the “Victorious Fatherland Liberation War Museum” in Pyongyang, The Associated Press reported. 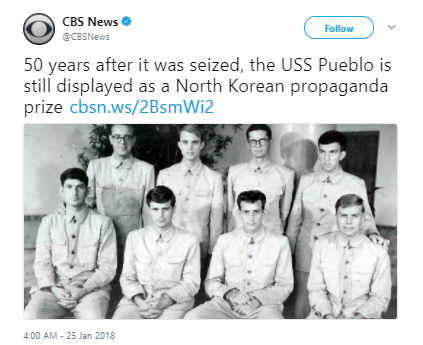 The USS Pueblo is the only U.S. ship that is still held captive by a foreign government.

The 50th anniversary of the capture of the ship took place on Tuesday, and North Korean state-run media flaunted the ship as a great achievement in North Korean history, as it currently builds up its nuclear program and has continued disputes with the United States over it.

North Korea’s state-run media, the Korean Central News Agency (KCNA), quoted a naval officer as saying that the ship is a symbol that the U.S. will suffer a “crushing defeat” if it interferes with North Korean sovereignty.

On Jan. 23, 1968, the USS Pueblo was engaged in routine surveillance in international waters off the North Korean coast. But a submarine chaser and other naval vessels captured the USS Pueblo when it tried leaving. North Korea opened fire on the USS Pueblo, killing one of the crew members on the ship. The rest of the 83-man crew was taken prisoner, bound and blindfolded, and charged with spying in North Korean waters.

While held captive, the crew members were beaten and forced to make confessions.

The crew members were also used as propaganda. Several of the crew members held up middle fingers in videos and photo shoots. The crew told the North Koreans, who were unfamiliar with the gesture, that it was a good luck sign.

The written confessions of the crew are currently hanging on a wall in the USS Pueblo.

On Dec. 21, 1968, Maj. Gen. Gilbert Woodward, the chief U.S. negotiator, signed a statement admitting the ship’s intrusion into North Korean territory and apologizing for their actions.